One East Conference game remains this weekend, but it has a limited effect on the NYCFC possibilities so why wait. I will add a brief update when the Orlando | Montreal game ends.

What We Definitely Know

With two games to go many things are becoming certain or at least clear, while others are just as muddled as ever.  Let’s start with what we know:

Top Of The East Scenarios

Next, let’s move on to the easy to understand scenarios. That also involves winning the East, or at least finishing second and getting a first round playoff bye.  Rather than explore all 2-game scenarios, let’s focus on where we will stand based on the next set of games in two weeks.

NYCFC’s chances are all but mathematically done. They trail Dallas by 5 points with 2 games to play,  and are tied with Colorado who has 4 games to play. Plus there is the tie with the Red Bulls.

What Has Happened To TFC At Home?

As of Sunday August 6 Toronto had a 4-game winning streak, and faced 4 of its next 5 on the road followed by 5 of its last 6 at home.  TFC went 3-1-1 in the next 5 and seemed on track to have a smooth path to winning the East. Oddly, the only loss came in the only home game in that set. Since then in 4-straight home games TFC is winless with one loss and 3 draws.  Giovinco has missed the last 5 straight games, and that could explain the entire slide by itself, but it also seems TFC has gone off form in more ways than his absence could explain.

The Remaining Schedule for NYRB, NYC, and TFC

All 3 have one home and one away.

The following are not predictions but statements of probability based on form and my judgment, for whatever that is worth.

The Red Bulls should beat Columbus at Home but lose or draw in Philadelphia.
TFC’s tougher game is against the Impact. Beating Chicago at Home should be near automatic.
NYC has beaten DCU twice this year, but DC has just won 3 straight and since Patrick Mullins joined them they have lost only 2 times in 13 games. The first was his first appearance in which he did not start. The second loss was in NYC. Beating DC in DC with their current form will be tough.  Finishing at home against Columbus should be easy, but the Crew remain the only East Conference team never to lose to NYC.  I almost believe NYC will win out, but neither game is a good matchup for NYC.

What Is To Be Done

With 2 games remaining it is easy to figure out:

The only missing possibility in the chart is a 52 point finish with one loss and one draw.

UPDATE: Montreal’s win moves them up to 4th Place and drops Philadelphia to 6th, who sit on 42 points. Just last week the projected 6th place finish was 42 and now that’s the base with 2 games to go. I am starting to wonder if the playoff line always jumps a few points at the very end of the season. 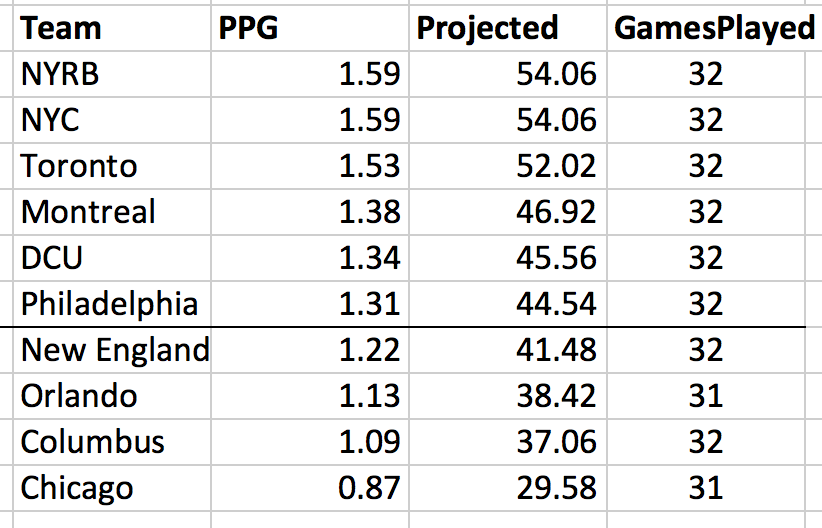 RSL drops off the list and is replaced by Seattle, who are mathematically out of the SS race and don’t have any real chance at CCL but deserve some recognition for their turnaround.  The only team with a real chabnce of catching Dallas is Colorado, and it will take a lot for that to happen. Colorado has to win their two extra games and keep pace with whatever Dallas does Dallas in the other two to pull ahead.  Colorado plays in the only game next weekend and plays midweek the following week to finally catch up on games played.

A Dallas win of the SS will free up one CCL slot and Colorado seems best positioned to take that. The Rapids are even with both NY teams on points and have 2 extra games to play.  That’s not automatic but it is theirs to win or lose. Even if you assume they lose the game that have to play on 2-days rest they still have a chance to get 9 points while NYC and RB can get at most 6.  Then, whether or not an additional spot opens up for the CCL, NYCFC’s best path is to overtake NYRB, who currently sit ahead on the tie-breaker, and are very unlikely to lose that advantage.