The playoffs are a certainty. NYC beat Chicago and the other dominoes fell properly this week so NYCFC has clinched a playoff spot, as did Toronto and the Red Bulls, all at the same time when the Red Bulls beat Montreal. I do not find myself particularly excited by this. I think the reason is that it has been a near certainty for 2-3 months, and a true (if not mathematical) certainty for 2-3 weeks.  Also the specific result that put the Bluebirds over the top was a bad result for the team in all other respects.  NYCCF is in a battle with the Red Bulls for Second Place in the conference and a first round playoff bye. The Pigeons really need the Red Bulls to drop points. That this RB win happened to clinch a playoff spot for NYCFC, which I considered a given anyway, was not even bittersweet. I just wanted NYRB to lose. Finally, with the other results this weekend NYC would have clinched once Columbus beat New England in the last game of the week Sunday night. With all that, I haven’t lost sight of how great it is the team is doing well and comfortably made the playoffs in its second year.

Apart from that Red Bull win it was overall it was a good weekend of results for NYCFC. The problem is that the most immediate concern is the Red Bulls and second place. Every other team we are trying to catch dropped points but they still seem hard to reach.

The Red Bulls and NYCFC won and everyone else dropped points.  The Galaxy lost, and every other team drew.  NYCFC is likely to lose the tie-breakers to everyone but LAG, so has to finish ahead on points to finish ahead.  As this chart shows, even if NYCFC wins out its remaining 3 games, they need Dalls to drop 6 points, Colorado 7, and Toronto 4.  The team that’s in reach and has the most immediate reward is the Red Bulls.  Also, it is unclear if finishing ahead of the West Conference teams will have any helpful results.  A spot in the CONCACAF Champions League is — maybe — up for grabs but there are so many movings parts to that calculus it seems too remote.  NYC needs to win and get help, or it will likely finish third in the conference, and my disappointment with that prospect is clearly of the moment. pre-season I would have taken it gladly.  It also seemed wildly optimistic on June 3, when the team had just lost at home to RSL, the Home record was 1-3-5, and the PPG overall PPG was 1.20.  By the way, I feel much more optimistic than this post is coming out.

The what needs to be done chart can start losing possibilities at the bottom with every new point:

This chart is officially meaningless to NYCFC but goes up for reference anyway. DC United is dragging the playoff line up just a bit. 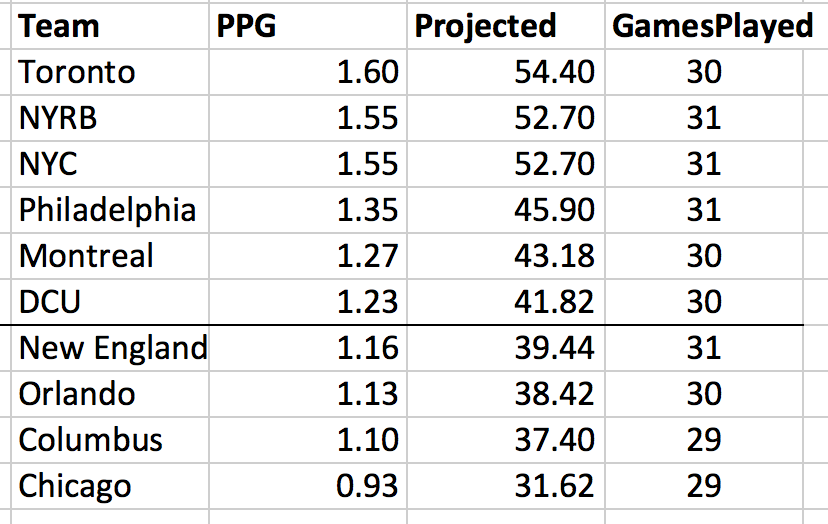 DC United is dragging the playoff line up just a bit. They have lost only once in their last 10 games, over which their PPG is 1.50 compared to 1.10 the rest of the season.  They are the only one of NYCFC’s remaining opponents over the playoff line at the moment.  But, the other two are also playing their best ball of the season, unfortunately. The Dynamo, who host NYCFC this coming Friday, are at 1.40 PPG in the last 10 compared to 0.95 before that, and Columbus is also 1.40 over the last 10 compared to a truly dismal 0.83 before that.

NYC has two road games left and has not won Away since July 17 at Montreal.  NYC’s only remaining home game is against Columbus which is the only East Conference team NYCFC has never beaten.  IF NYCFC finishes strong some negative streaks will end.

Montreal’s maximum point number is 50. DCU sits at 49.  NYCFC have 48 points today. One NYCFC win, or Impact or DCU loss, and NYCFC clinches finishing at least in Fourth Place and a home playoff game in the first round of the playoffs.