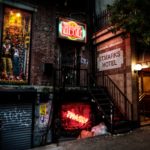 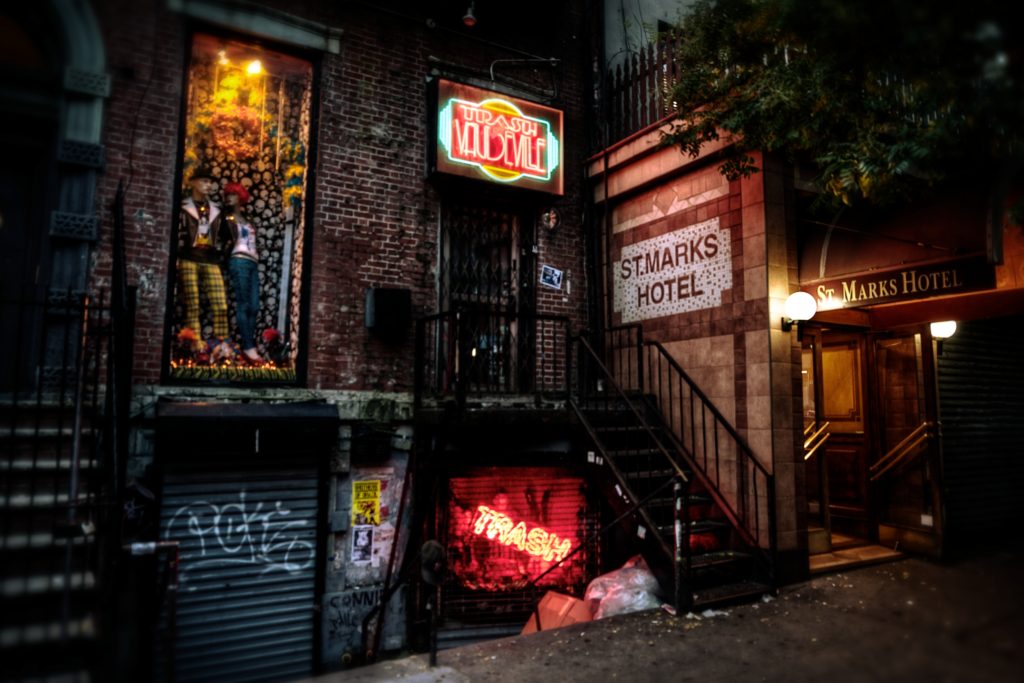 Busy week so the text and commentary will be slight.

For this first time this year, NYCFC has played more games (26) than there have been weeks in the season.  Still a couple to make up though, as this year has only 31 weeks with the playoff shift.

I dropped 4 lines from the bottom of the possibilities chart, and frankly, 52 and even 55 seem barely possible. Both would entail a ridiculous collapse.

Two-game week so 2 of these. I started doing it at 16 games. NYC has been on top by itself 5 weeks, including the last 4 in a row, and tied twice: once with Atlanta (Wk16) and once with Philly (Wk19).  The Union was on top the other 4 weeks. 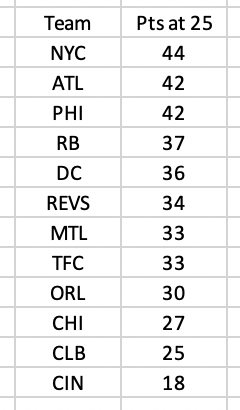 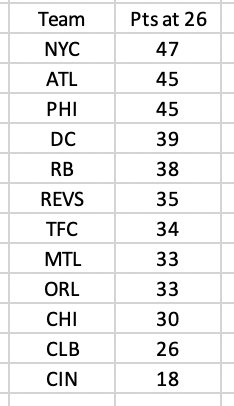 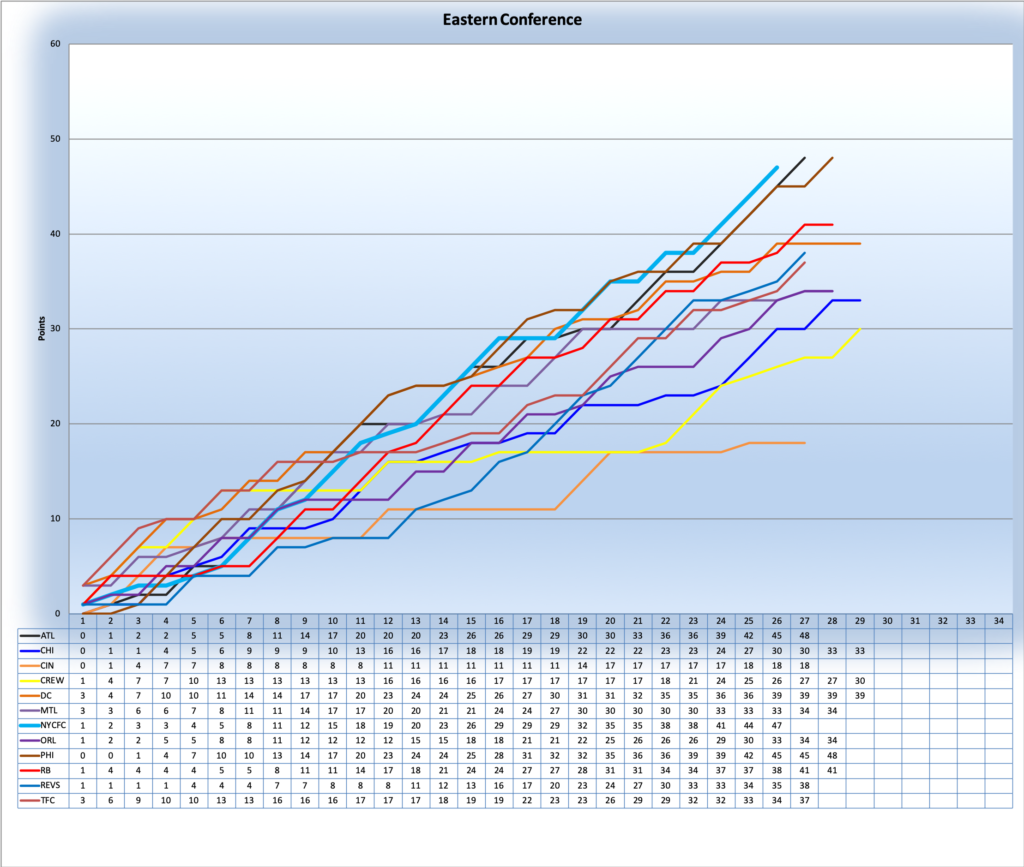 NYCFC has clinched over Cincinnati and Columbus. 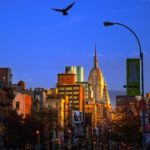 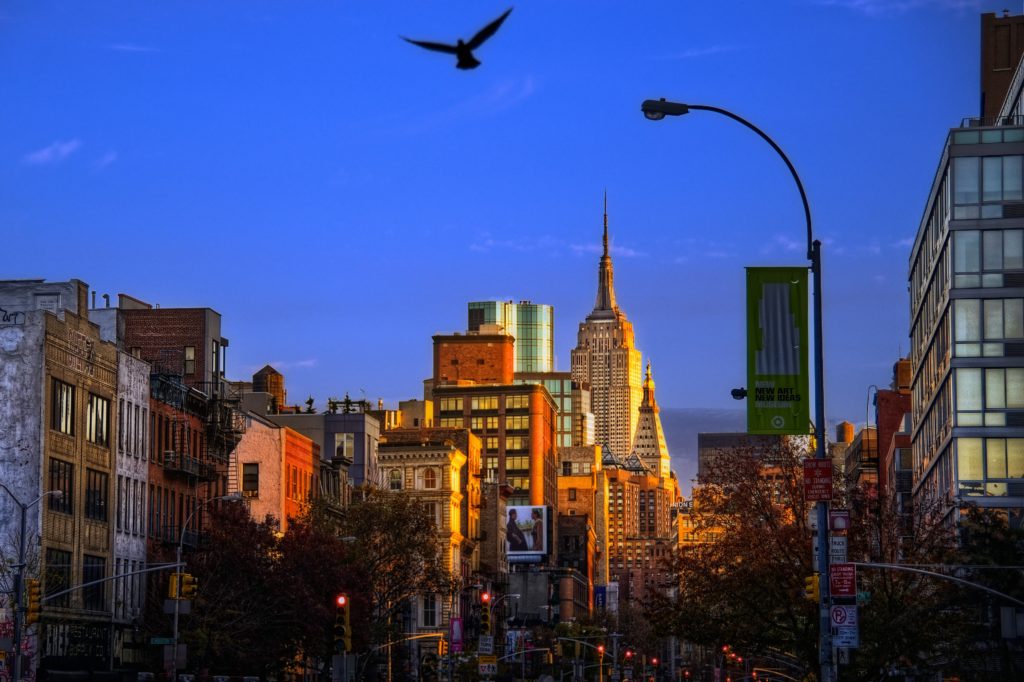 NYCFC has 6 of the last 10 at Home, which is nice, but the next 6 games are where the team needs to accumulate wins and points.   Five of the next six are at home, and the lone Away game in that stretch is against Vancouver, which has a losing record at home right now.  Yes, that game involves transcontinental travel, and other games will be on short rest, and the Red Bulls are always tough, and NYCFC’s record at home against New England is worse than against any team outside of Portland.  But there is no denying these games are easier than the last 4 games of the season.  None of the 5 teams NYC will host at Yankee Stadium in this stretch has an Away PPG better than 1.15 PPG.  That’s New England’s Away PPG, and it’s also worth mentioning that the Revs are undefeated Away since firing Friedel (3-0-4).  But these are still 5 poor Away teams with an average of fewer than 3 Away wins per team. NYCFC probably needs 15+ points (OK maybe 13 or 14 if other things go well but that’s pushing it)  from these 6 games to have a shot at finishing first as it heads into the final 4 games, which include hosting Atlanta, and Away to Dallas, New England and Philadelphia.

It looks like a 3-way race for first place in the East right now.

The Atlanta win over Portland in Portland was huge.  According to 538, that game by itself dropped NYC’s odds of coming in first from 51% to 43% (though still slightly higher than Atlanta at 42%).  Before that game Atlanta had won 4 of 5 in league play but all 4 wins were at home, their road form has been very poor, and the 5 Stripes faced a schedule in which 6 of their final 9 were away. But they just won a very tough road game on short rest and transcontinental travel and raised their Away PPG from 0.82 to 1.00.  They still have 5 Away of their remaining 8 but those include Orlando, whom they always seem to beat, and Cincinnati.  Their harder Away games are Philadelphia and NYC. The wildcard is their game at Montreal, where the Impact are not invincible but reasonably tough, and Montreal is a wildly unpredictable team this year.  By the way: Atlanta has 12 wins by shutout.  NYC and Montreal are the only teams to score on Atlanta and lose.
The Union have just 7 games remaining. 4 Home 3 Away.  But their Home games are fairly difficult, hosting DC, Atlanta, LAFC and NYC.  The Union’s Away games are to the Red Bulls, San Jose (much tougher at Home than Away) and Columbus.
Based on schedule alone. I think Philadelphia slips a little. Atlanta still has those road games, and the question is whether the win over Portland is an outlier or a early indicator of a new trend in which they start winning Away.  NYC’s schedule is comparatively soft, and if they slip I think it will be on performance. Also, I’m not concerned too much with the midweek game situation and short rest for NYC.  NYCFC has 6 remaining games on short rest. That is a lot, but so does Atlanta.  And every time NYC plays on short rest from now to the end of the season, its opponent also will be on similar rest, within a day at most.  NYC never plays on short rest against a team on 6 or 7 days rest the rest of the season.
Nothing matters but the weekend/ From a Tuesday point of view. 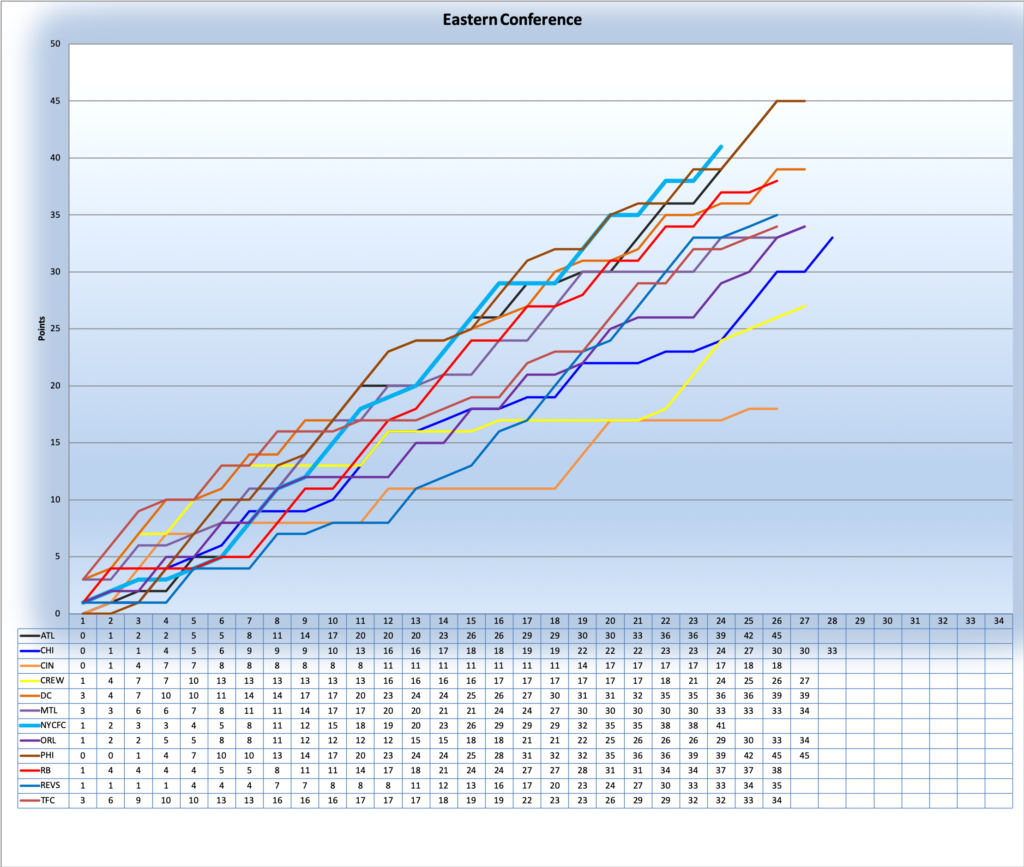 We are close to surpassing the bottom rungs of the future possibilities table. 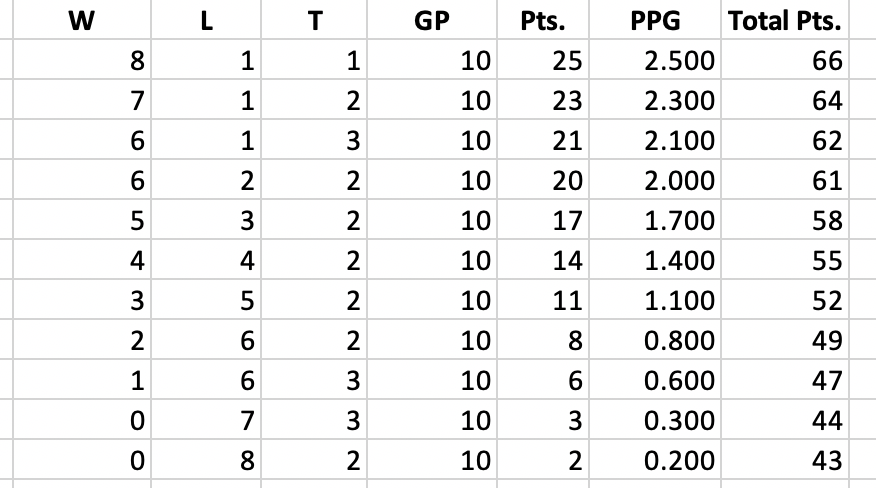 NYCFC 2019 still trails 2018, but the opportunity to do better is clearly there.

I took last week off which was a double game week. So here are the mythical standings in which every team in the East has played the same number of games for 22, 23 and 24 games: 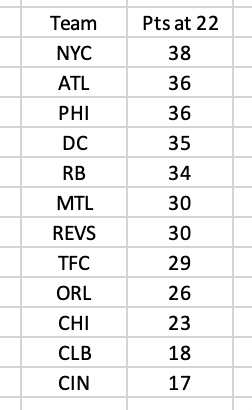 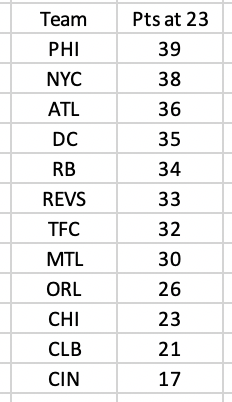 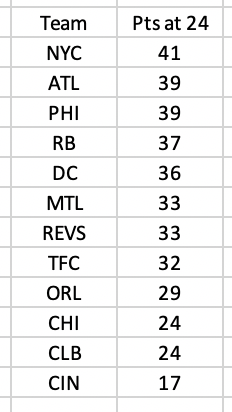 Finally, the magic number to clinch not finishing last is 2, so 1 NYCFC win or Cincy loss or Cincy draw manages that. The number to clinch over Columbus is 8, so a win over them midweek, plus 1 additional NYCFC win or Crew loss or Crew draw manages that and is possible this weekend. Next up behind them is Chicago for whom NYC’s magic number is 11. 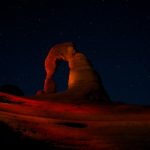 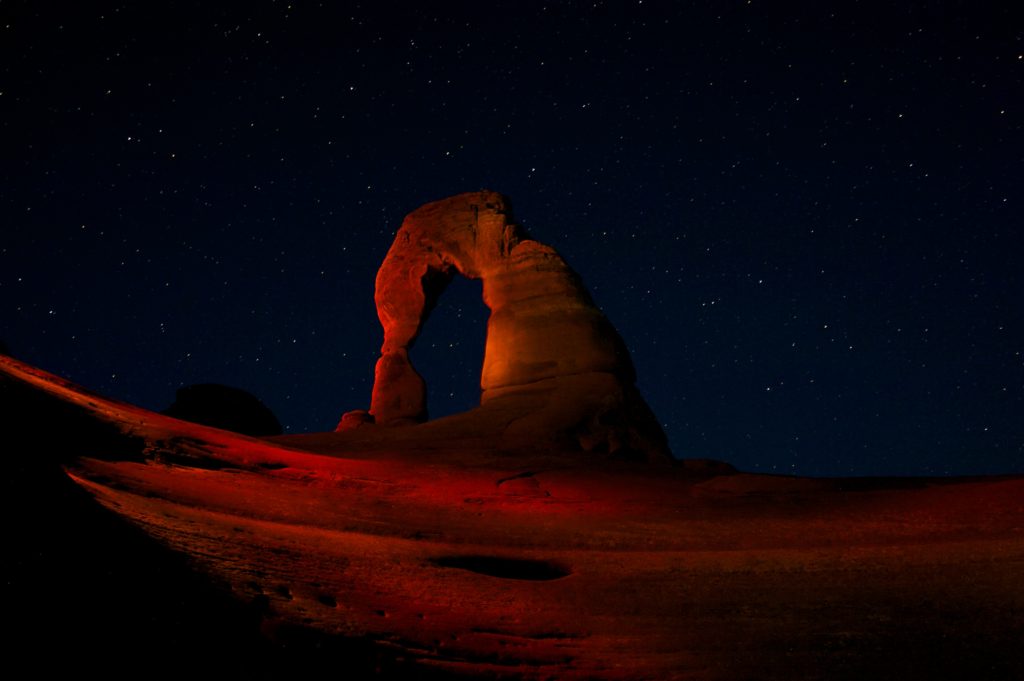 NYCFC have now played at Rocky Mountain altitude in 2 of their last 3 games, winning once and losing once (with a win at 33 feet above sea level in NYC in between).

Last week NYC won while most of its East Conference rivals lost, this week NYC loses while Atlanta, Philadelphia and the Red Bulls win.

The most dangerous lead in soccer is apparently 1-0 in a NYCFC Away game.  The team to score first has lost in NYCFC’s last 3 road games, and has only won 4 times this year in 11 games. Every one of those 4 wins was a shutout (3 by NYC). 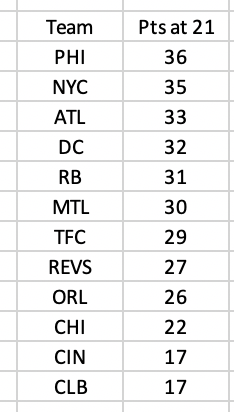 NYCFC’s last 5 games L-L-W-W-L has them again sitting just below Philadelphia on both the current PPG and Points at 21 Games metric. Missing players forms a common thread to most of NYC’s recent struggles. At RSL they were without arguably their best winger (Shradi), best defender (Callens) and bets player (Maxi). But that has to be a concern going forward as NYC has to make up so many games, which will definitely require some squad rotation and possibly cause injuries. 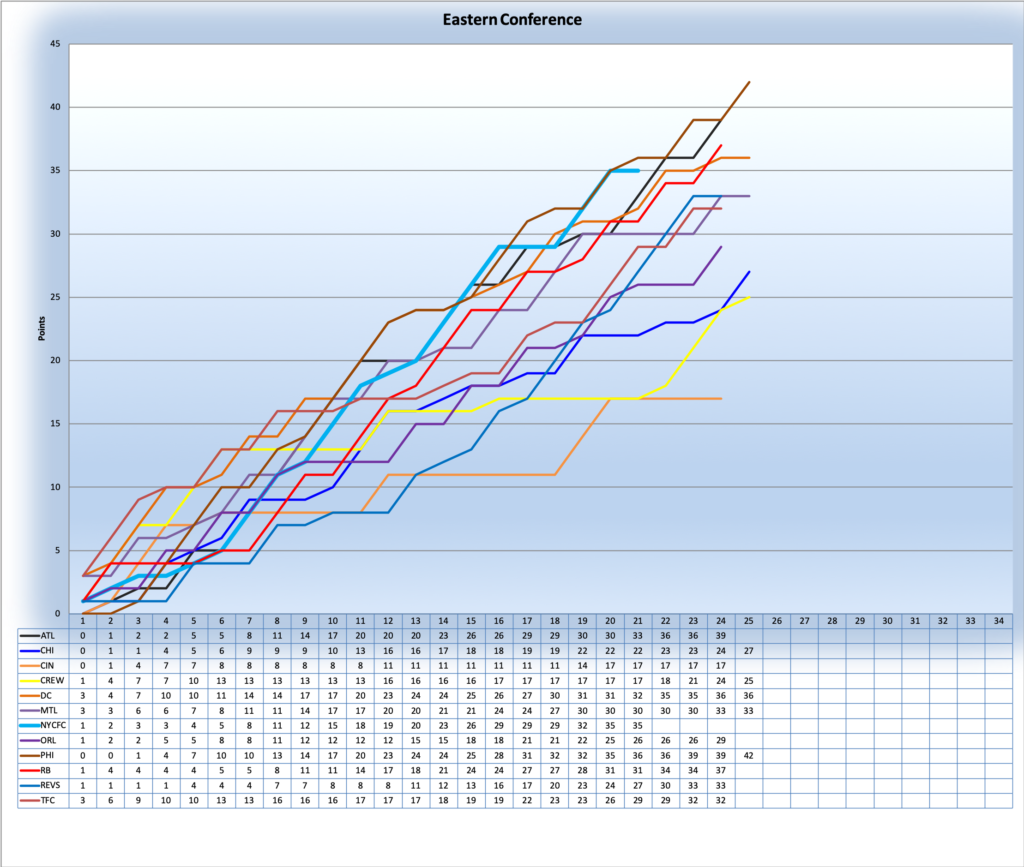 In the race between annual versions of NYCFC, we have just hit the peak of 2018, when Domè won 5 of his first 6 games as head coach and everyone was wearing pineapple shirts.The 2017 slide started about 6 games later, if you’re wondering when 2019 has it’s best chance to catch up. 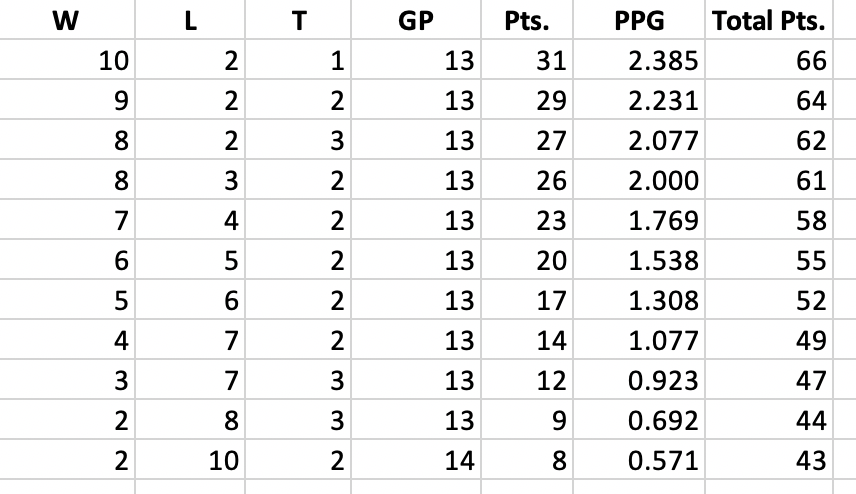 Based on their records at Home, the just concluded RSL game and Atlanta game in a few days are the 2 toughest Away games on NYCFC’s schedule all year. After Atlanta this coming weekend, the schedule gets very easy, on paper at least, with 7 straight very winnable games of which 5 are at home. After that, there is a tough final month with FCD(A)-ATL(H)-NER(A)-PHI(A).

It’s becoming something of a rout (and as a preview, the first weekend in August continued the trend). The pattern is pretty consistent, as well. The East wins most of its home games, but not by much, while the West wins a much higher percentage of its home games. It’s that simple.