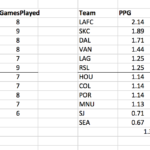 Nine games in, NYCFC has passed the one-quarter mark, and it is time to start with graphs, numbers, and pseudo-legitimate projections. The playoffs seem to be a given, but this team has a realistic chance at Supporters Shield, a CCL spot based on 2-year record, and a playoff bye. Last year at this point NYC was third in both the regular and PPG standings behind Orlando and Toronto. That Orlando did not make the playoffs tells you how much weight to give to anything this early. With 16 points, NYC projected to 60-61 points this time last year, a little above their eventual total due to the late season slump.

Yesterday was almost all interconference as 9 of the 11 games played were interconference and the East collected 5 wins against 3 losses and 1 draw. Until then the conferences were surprisingly even. The East seems dominant but it is not showing up in the records quite yet. Order the Supporters’ Shield standings by PPG and there are 5 from each conference in the top 10.
NYC has played 3 of its 5 games to date against the West and is 3-0-0. Subtract that from the total and the West is beating the East, slightly.