What a bad week of results.  The only real positive was that DC United pulled back a tie after being down 2-0 to the Red Bulls. Thanks to that NYC is tied with RB and not 2 points behind. The Philadelphia/Montreal tie was good, but neither team seems much of a threat.  Toronto’s win in Chicago ends TFC’s “tough”schedule stretch in which they had to play 4 of 5 on the road before finishing with 5 of 6 at home. Before that 4 0f 5 stretch started I wrote“If TFC gets just 7 or 8 points in their next 5 tough games they are in very good shape even if NYC gets 18-20 more points overall.TFC is very likely to get 12 points in their last 6, with 5 of them at home against weak road teams. So 8 + 12 would mean 20 points in their last 11 and 56 total. NYC needs to go 6-2-2 to beat that. That’s doable, but I’d feel a lot better if TFC gets say, 5 or 6 points in the next 5 games. ”

Well, TFC got 10 points in those 5 games, oddly winning 3 of the 4 Away and losing at Home. In that same period NYC earned only 7 points in 5 games. Now TFC sites 2 points up plus a game in hand. First place seems extremely unlikely. But who knows. Maybe TFC collapses at home.  I would not count on it but this season is very unpredictable so it would not be a shock either.

The larger concern is being tied with the Red Bulls with 5 games to go. We both have 3 Home Games and 2 Away. At this point we are both strong at Home and weak Away. We could easily finish tied. The first tiebreaker is Number of Wins. We are currently even and with 5 games to go it is likely that if we finish tied the two teams will still be tied on Wins. Yes, NYC could go 3-2-0 while RB goes 2-0-3 but more likely we stay tied on Wins.  Then the nest tiebreaker is Goal Differential. Here, there is no hope. RB has a +12 GD and NYC sits at -1.  The odds of that changing while the teams remain tied on Points and Wins is effectively zero. Even if NYC gets 5 wins and RB gets 5 losses it is not so very likely to change. The point being that NYC needs to finish ahead of RB on points to finish ahead of RB, to finish second, and to get the first-round playoff bye. Barring a convenient NY-RB collapse, NYC will need to resume winning on the road.

NYC’s poor Away form means the team has not had even a solid 2-game streak of good results since winning 4 in a row in a streak that straddled June and July. In the 10 games since then the best “streak” for NYC was 2 draws in a row as the results have been L-W-L-W-D-D-W-L-W-L.  Whether NYC can change its road results back to positive will likely determine where it finishes. Getting either 4 or 6 points in the final 2 Away games would be huge. Even getting 3 could be a difference maker.

The East Conference PPG Playoff line is still pointing in the low 40s, with no indication it will move anywhere near last year’s line of 49. 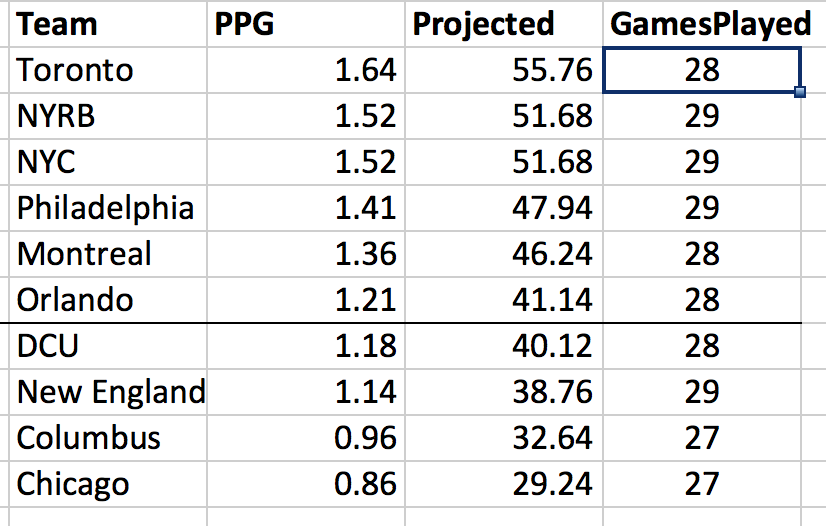 Even if Orlando goes on a streak, Montreal seems stuck in a mid-40s range and is drifting lower right now, so that is probably a ceiling on this year’s line.

Finally, and sadly, I had to cross out 3 possibilities at the top of the What-We-Need-To-Do chart.

UPDATE: I forgot to add the following earlier.

Finally, the loss also means limited headway on the playoff clinching front. A win would have guaranteed that NYC finishes ahead of the Revs. Instead it still takes a minimum of two games of perfect results to clinch over the Revs, as well as Chicago and Columbus. It will take at least 3 good game results to do the same for DCU or Orlando.