Before starting, remember we probably lose a tiebreaker if we end up even on points with anyone. Anyone who ties us will probably end up with at least the same number of wins and they all beat us on GD absent some giant wins by NYC.

Winning the Supporters Shield will take extraordinary results. There are now 6 teams in contention, which makes climbing to the top of the pile that much harder unless you are already there. Dallas has a 7-point lead on us with 10 to play. That doesn’t sound too bad considering we play them right? If we win we only have to pick up 5 points in the other 9 games.

Let’s say we do something amazing like finish 7-1-1 in the other 9 games and end up with 62 points. DFC can get 62 points by going 6-3-0 in their other 9. Overall that’s 18 points in their last 10 games which is 1.8 PPG which is in line with what they have done all season. Anything worse than 8-1-1 from NYC, and Dallas is almost a sure thing to stay ahead of us, and if they really stumble, we still have to contend with the other 4 contenders. If you want to believe, go ahead. It can happen, but realize it is a very big ask.

When NJRB was winning 2-0 last night this was shaping up to be just about the worst possible weekend of results. TFC won twice, Montreal won, and Philly managed a road draw. LA’s ability to grab the draw back from the Scarlett Steers was really big for us, as a road win in LA would have put the Red Bulls just 2 points behind us and suddenly able to beat strong teams Away. That was kind of scary to contemplate. They’re not out of it, and I would have preferred a loss, but those extra two points make a big difference and I think with our easier schedule we should stay ahead of RBNJ.

During a hot, lazy Sunday, I went through the remaining schedules of the top 5 East teams using these parameters: What if NYC performs at the low end of its current form, while everyone else performs at the upper end of their current form. If any team goes on a tear or collapses then they easily win or drop out of contention so that’s not worth measuring.

For NYC, I started by assuming we lose the 3 toughest games: LAG and DFC at home and ORL on the road. We win the other 3 Home and go 2-1-1 in the other 4 Away games. That comes to 16 points in 10 games, 1.6 PPG and what I would consider a moderately disappointing finish to the season. Even though 1.6 is slightly better than the current average to date, with the schedule we have and the team’s form since game 8, we should do better. But it’s not disastrously bad, and NYC finishes with 53 total points.

I’ll skip the game-by-game for the other teams, but when I ran through the TFC schedule assuming they do well but not amazing, they finish 6-2-3 for 21 points in 11 games and 1.91 PPG, and 57 total points. That leaves a 4 point edge for TFC. Rounding it out, Montreal and the Red Bulls both ended up with 52, and the Union with 51.

It’s all rather meaningless, except this: with so much close competition NYC probably needs to win at least 6 of the last 10 to finish first. Moreover, If TFC gets just 7 or 8 points in their next 5 tough games they are in very good shape even if NYC gets 18-20 more points overall. TFC is very likely to get 12 points in their last 6, with 5 of them at home against weak road teams. So 8 + 12 would mean 20 points in their last 11 and 56 total. NYC needs to go 6-2-2 to beat that. That’s doable, but I’d feel a lot better if TFC gets say, 5 or 6 points in the next 5 games. 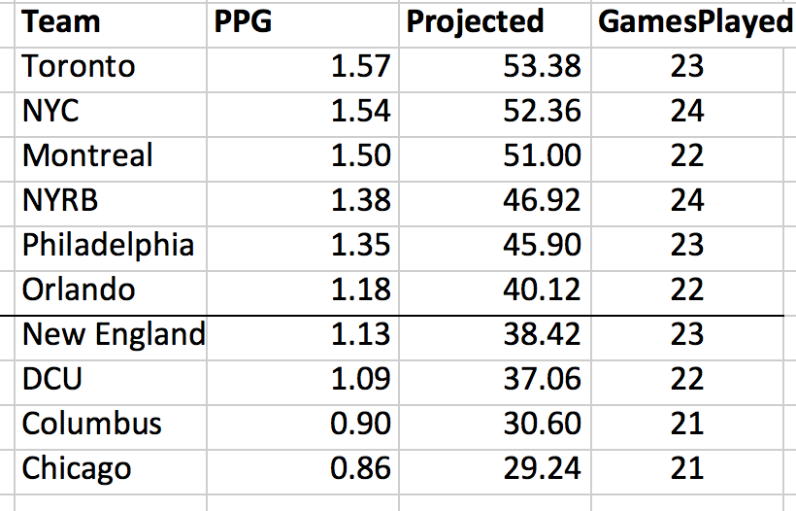 What we need to do to get certain results.

I haven’t changed this chart since I started the thread except to adjust for updated results. Midweek I think I will revise the lines and scenarios altogether. For one, because NYC went 9 straight games without a draw some of the remaining possibilities seem ridiculous. I suppose we could go 3-2-5 but it’s not worth tracking. Second, I should probably drop some lines from the bottom and add some to the top. At this point any of the results below 47 points would be too disastrous to contemplate.

Final fun fact: NYCFC right now has the same number of both wins and draws as all of last year, and 10 fewer losses.