In 2017-18, MLS teams averaged 7.7 draws per season. NYCFC now has 7 in its first 12 games in 2019.  Ties are statistically weird. They seem to follow no patterns. In 2017 Montreal had 6 draws in the first 14 games and none the rest of the year. in 2016 New England had 7 in the first 10 games and 2 in the last 24 games. Teams with high draw counts sit pretty evenly on both sides of the playoff line. They are certainly not a bar to success: the 2017 MLS Cup featured Toronto with 9 draws against Seattle with 11. The 2015 Rapids finished last with 10 draws and the 2016 Rapids finished second with 13 draws.

The conventional, and largely correct, wisdom, is that a draw at home is 2 points lost while a draw on the road is a point won.  So perhaps the most disheartening fact about NYC’s draws to date is that NYC has 4 home ties and 3 away.  So why did the Week 13 draw against Chicago seem so disappointing?  Part of it is the sheer number of draws to date, combined with a sense that NYC should be better than its record (whether due to the coach or other factors), and the sense that NYCFC had seemed to turn a corner, and drawing with an opponent many think is inferior seems to be a step backwards.  But it’s also true that winning on the road is tough in MLS and NYCFC came into this game with a 3-game winning streak in Away games. Breaking that with a listless draw beats the alternative.

Another concern is that NYCFC has only 16 goals in 12 games, which is not good, but I see reason for cautious optimism. First, NYC scored 4 goals in the first 5 games. Since then, starting with Minnesota, it’s been 12 in 7 games, of which 5 were road games. The Minnesota game is pretty much the hinge for a lot of things in the NYCFC season. NYC was shutout 3 times in the first 5 games, and nonce since. Also, goals are down league-wide. Individual teams are averaging a bit over 1.4 GpG. NYC is below that for the season at 1.33, but hitting 1.71 starting with Minnesota. On the other hand, the team scored just 1 goal in 3 of the last 5 games, and it’s extra disappointing that even after things improved they only scored 1 in each of the 2 home games in that stretch. And no matter what happens in Columbus it is hard to be fully optimistic about the season until and if NYC starts scoring more and regularly winning at Yankee Stadium. 7-10 points in 4 straight Away games is very good to exceptional, but you have to stockpile points at Home.

Despite the draw, and a slight decrease in NYCFC’s PPG, it again improved its position relative to a large number of East conference rivals, largely because the East went 0-6-1 against the West this week. In the last 2 weeks the East has 1 win, 11 losses, and 2 draws against the West. NYCFC played none of those games. 10 of them were played in the West, but that’s a lot of good results for NYC. Nine more interconference games on tap next week with some more favorable matchups for the East.  Meanwhile, NYCFC has a lot of interconference games remaining. So far the team is 1-0-2 against the West (1H2A) with draws against LAFC and Minnesota, and the LAG win. In the remaining games we are home to Seattle, Portland, SKC, Houston and San Jose; Away to Colorado, RSL, Vancouver and Dallas.

Here is the table of examples of what NYC needs to do to reach various point values. 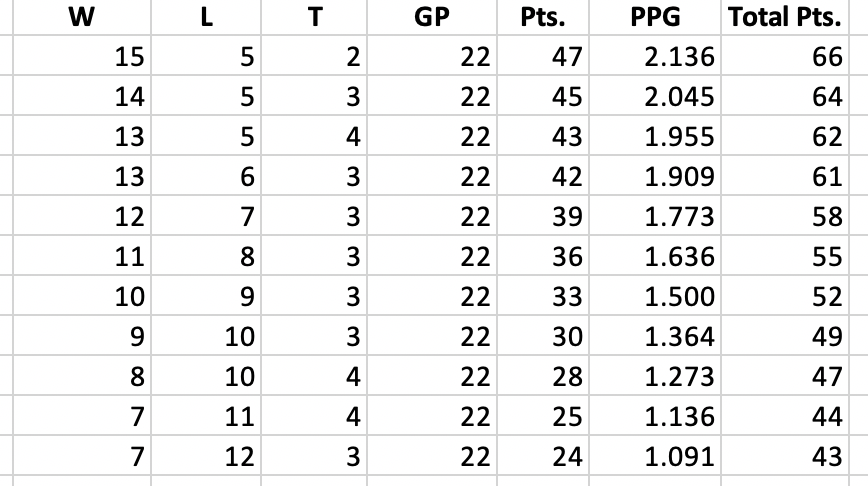 Barring another 7-goal loss debacle, NYC’s goal differential in 2019 should be significantly higher than 2016, which still seems the best analogue.

If you look at every team’s point total through the 12 games NYCFC has played, NYC (19) is behind DC and Philadelphia at 23, Atlanta and Montreal at 20.  But those team have managed very little with the games they have played beyond 12:

The opportunity is there. 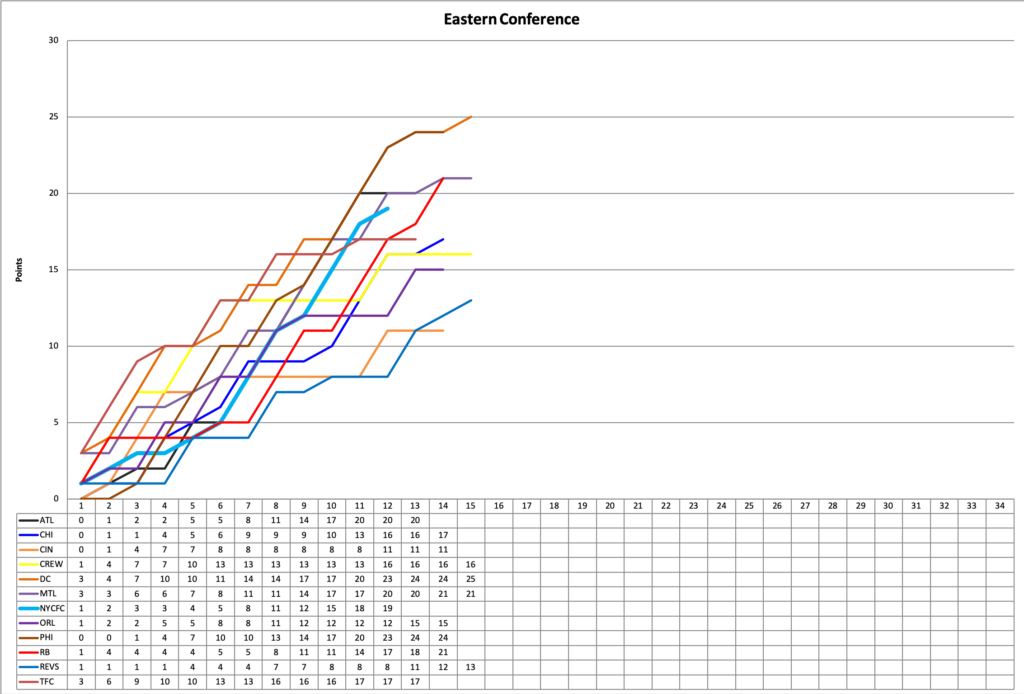