I wish I could tell you that the numbers underlying NYCFC’s disappointing performance have gotten much better, or clearly signal a better future. I can report that in the limited data available for 2019 the gap between the record and the underlying data has basically gone away, at least by the best single metric we have. That statistic is the Home/Away adjusted xGoal Differential, and in 2019 (with the disclaimer that I’m waiting on the 2 most recent games), NYCFC has the 13th best H/AxGD at -0.4 , sits 13th in the Supporters Shield standings, and has the 11th best PPG (tied with Orlando).  That all pretty much matches.

H/A xGD is the best predictor because math and history tells us so, with thanks to Dummy Run:

Building on what @TiotalFootball wrote yesterday, here's why you should spend less time looking at the MLS table right now and more time using the new home-adjusted feature on @AnalysisEvolved's xG tables. pic.twitter.com/MpfFLt3092

I’ll “borrow” the graph to make it easier to see: 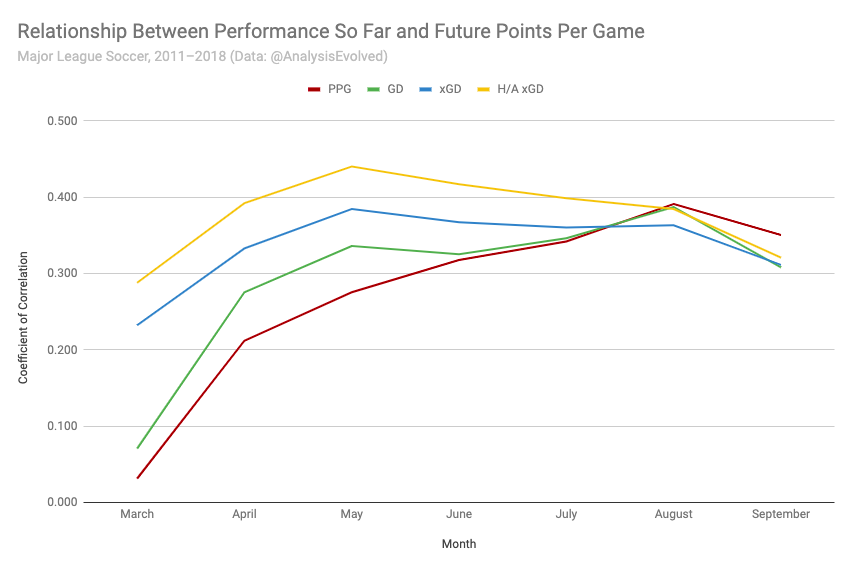 In sum, this stat does a better job of predicting future results in MLS than any other rival, at least until August. Home/Away adjusted xGoals is a tweak to the regular xGoal stat that adjusts the actual xG earned in any given game to reflect effect of home stadium advantage.  The ASA team has not written it up that I can find, but I think it acts as a sort of schedule adjustment, especially valuable if some teams have a significant H/A imbalance early in their season.  I’m not quite sure why PPG becomes better than all the others in August. It seems consistent with something I expect most advanced stat people would reject, which is the idea that the ability to achieve game results is somewhat unmoored from both average Goal Differential and xGoals, and it simply takes a few months for that tendency to assert itself. If anything, if the theory that divergences between results and xG is a matter of luck is correct, I would expect the relative predictive advantage of xG to increase over time, not decrease.

But in any event, we are still in relatively early days of the 2019 MLS season. where H/A xGD rules (but still is not particularly great – a correlation coefficient that never reaches 0.5 is not particularly strong).   Also, at the end of the day, I find lamentations that a team or player’s  results do not match their performance unconvincing.

There is a romantic appeal to this scene, in which lifelong minor leaguer and occasional major league catcher discusses how little is the difference between mediocrity and greatness. His math works out. It is roughly just one hit a week that separates a .250 hitter from .300, but really, what Crash is asking for is for luck to go his way all the time. Nobody is entitled to get one cheap hit every week, and nobody is entitled to win more soccer games if they cannot score at least one goal on average at home games. Even with the disastrous last 22 games, Torrent still has a higher average xGD that Patrick Vieira did overall, mostly on the strength of his first 6 games, and I don’t care. If anything, I think the team overachieved its xGD under Vieira more than that it is underachieveing its performance under Torrent.

With that prologue, let’s look at the usual charts and tables:

The playoff line starts at 44 and would be the second lowest playoff line in the East since MLS went to a 34 game schedule. I expect it to be higher, but it is what it is right now. Also, I’m not going to revise this to include H/A xG – despite what I wrote in the opening – because I think the inclusion of a dozen teams swamps any additional accuracy that H/A xGD might have for one team.

Here is what the team needs to do to achieve some fairly optimistic totals. 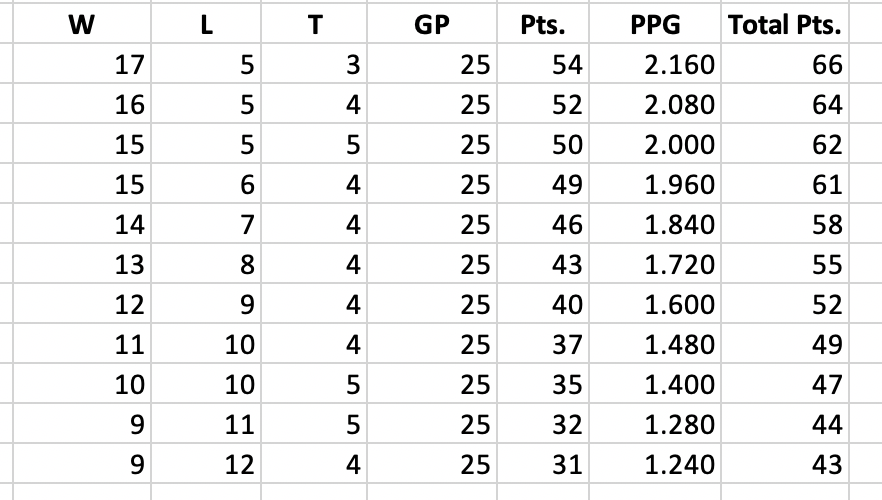 Yes, I went back to 2016 and 2015 for comps. I figure that is where we are. Either the team recovers and has a season like 2016, with a weak start featuring too many draws followed by a very solid second half, or it has a non-ambiguous disappointing bad season, for which the only exemplar to date is 2015.

NYCFC has never gone a season without at least 1 DP missing 10 or more games.  With all 3 DP slots signed before the season started, and none of them injury prone or particularly old, one could hope that streak might end this year. But Jesus Medina has now missed the 2 most recent games per coach’s decision and has not played many minutes in the games he has appeared in, averaging only 41 minutes per appearance and 32 minutes over all games.

The most draws NYCFC has ever had in a season is 9, which it did in both 2016 and 2017. This year there have been 6 ties in the first 9 games. But there is no pace, pattern, or predictability with ties.

A Bit Of History 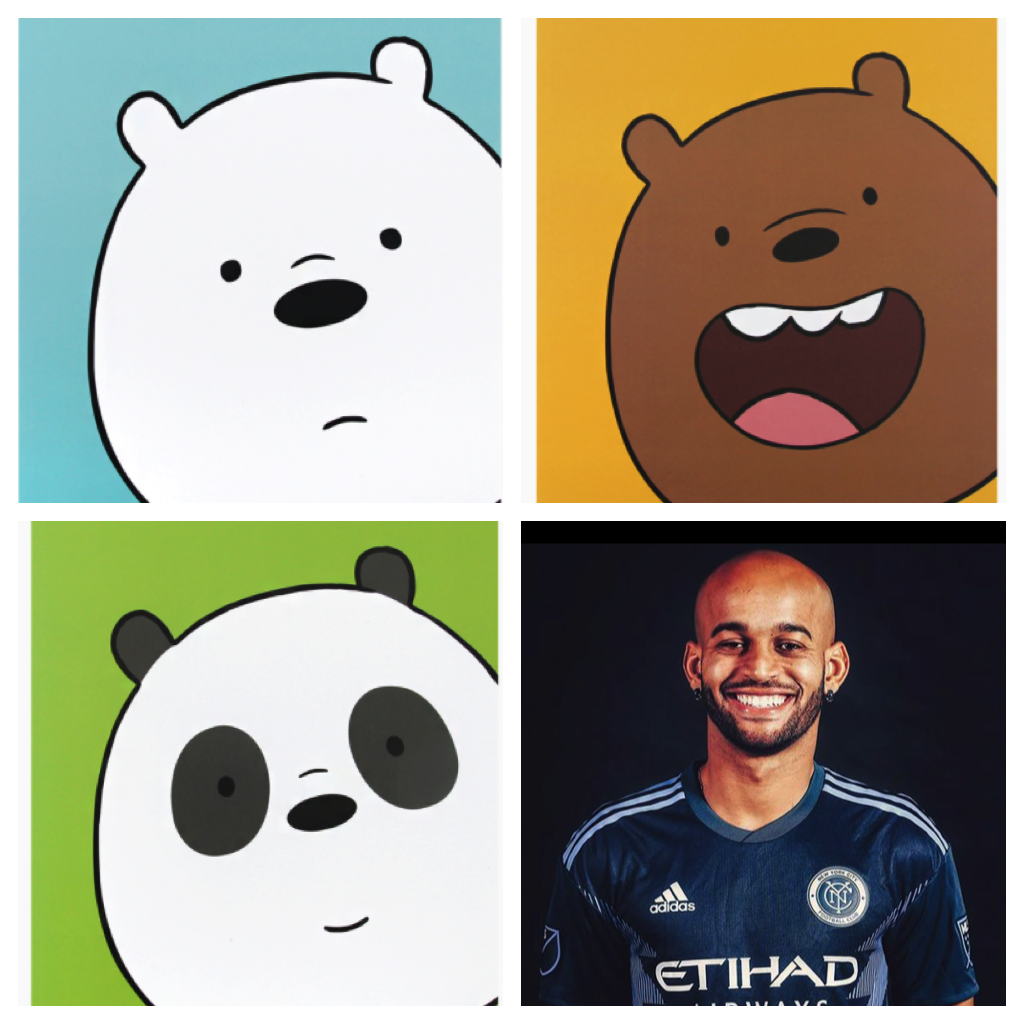