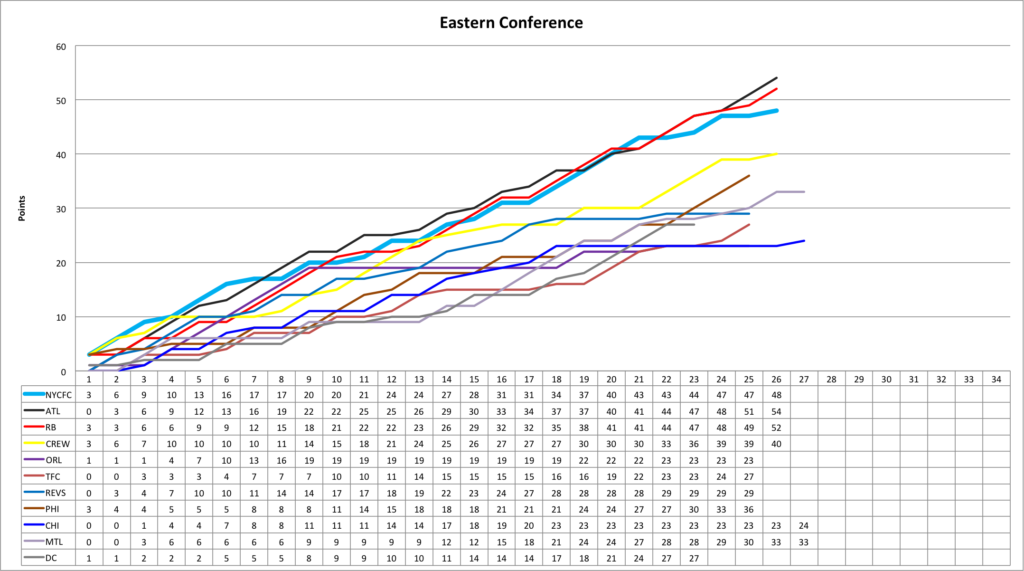 It’s not pretty for finishing top 2.
Atlanta has 17 points from its previous 8 games. If they get 17 from the final 8 coming up, NYC has to win every game to pass them. But, Atlanta has Away games at DC, RBNY, and TFC. If they lose all 3 and tie one somewhere, that’s only 13 points, and NYC needs to finish . . . . . . 6-1-1 just to draw even on points, then probably have the same number of wins, and likely lose on GD. Also note that Atlanta lost 4 games all year, and losing 3 of the final 8 represents a major slump. It can happen. Worse can happen. But these are major hurdles.
Viewed game-by-game, RB might have an easier schedule than Atlanta, with the toughest games being Away in DC, and hosting Toronto (poor road record but finally in decent form) and Atlanta. They also have some middling Away games in Montreal and Philly. The Impact are above average at Home, though not by a lot. The Union are exactly mid-table on Home form, but seem improved. The Red Bulls’ other 3 games are easy: home to Houston and Orlando (7 Away points and 6, respectively) and travel to San Jose (8 points in 12 games). A poor 4-3-1 finish for RB is 65 points, and NYC must finish 5-0-3 or better to exceed that. Red Bull schedule is kind of crazy right now, after hosting Houston they go to Montreal on Saturday. Five games in 15 days. This could be NYC’s opening, but if they don’t drop points here…

Most likely, NYCFC needs one of Atlanta and RB to lose all its remaining tough games, plus suffer an upset or 2, to have a meaningful chance to overtake them. Also, a 7-game winning streak like Seattle has going would help (though still not guarantee anything).

It feels as if NYC has been treading water since the start of the season, but look at it this way. NYC started 5-0-2 (2.43 PPG). Since then the PPG over the next 19 is 1.63. That is a significant drop, but besides Atlanta and RB, only Dallas, SKC and LAFC are better over the entire season (and LAFC barely so). If you excised those teams’ best 7-game stretch it would get much uglier for them. In sum, NYC’s season disappoints because Atlanta and the Red Bulls are heading to possible all time great seasons at the same time in the same conference.

Who do you want to face in a first round playoff matchup? The Union seem likely to grab the 5th spot, with a puncher’s chance at catching the Crew. The mostly likely 6th place finishers are DC, the Impact, and Toronto. 538 ranks their chances in that order, with a big gap after DC. I know some people have shown concern over facing Toronto. Even DC, though much weaker on the road, could be scary given their surge. It could be that the best thing NYC can do to improve its chances would be to win both games against DC and make it a little more likely that Montreal slips in.