This week I’m just going to drop the charts and graphs and then offer some quick hits, mostly on other clubs. 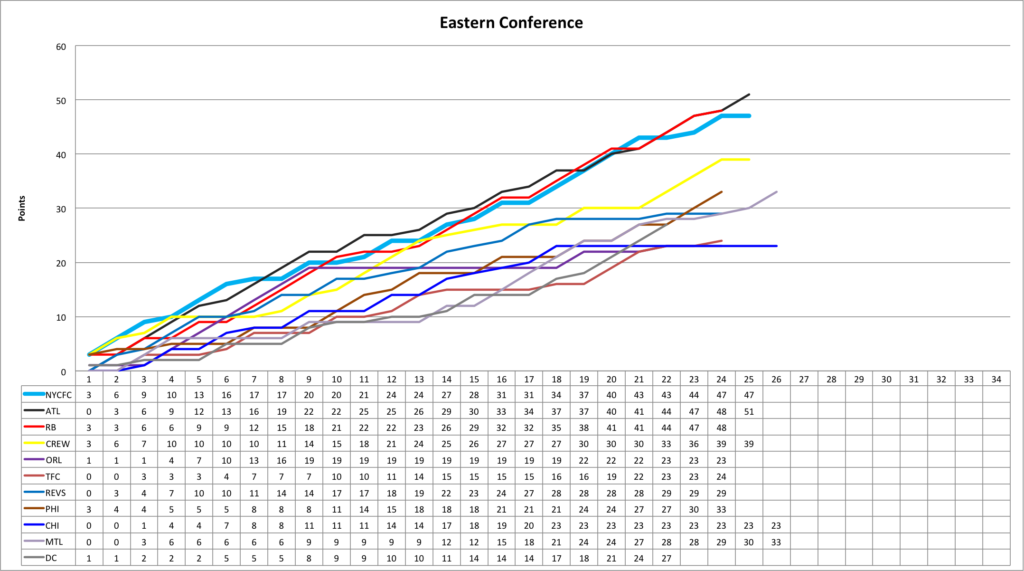 Turning to our rivals, the chart immediately above shows that although the schedule timing is skewed, the Red Bulls and Atlanta have perfectly matched point totals starting with game 21 for each team and this has maintained through game 24, with Atlanta winning a game 25 the Red Bulls haven’t played yet. Just a reminder that the win NYCFC fans so desperately want this week also helps Atlanta.

DC has already made it closer sooner than I expected, with the one big win — based on strength of opponent — over Portland midweek, and another big win — based on rival for the playoff spot — over New England last night. I’m sticking with my prediction that DC does not make it though right it looks like I will be wrong. Their biggest issue could be having games stacked on top of games. From the end of July through mid-October they average a double game week about every other week with one international break mixed in. Last year Atlanta stumbled near the end of a similar schedule.Still, they are in solid shape.

Looking West, and speaking of Portland, after not losing for 15 games they have lost 3 straight, while the once stumbling SKC has won 3 straight. Seattle have climbed over the playoff line based on PPG if not actual standings, and are the latest flavor of the week in that conference. Meanwhile Dallas just keep churning and staying on on top, with only 5 losses and quality wins over LAFC, Atlanta, and SKC.