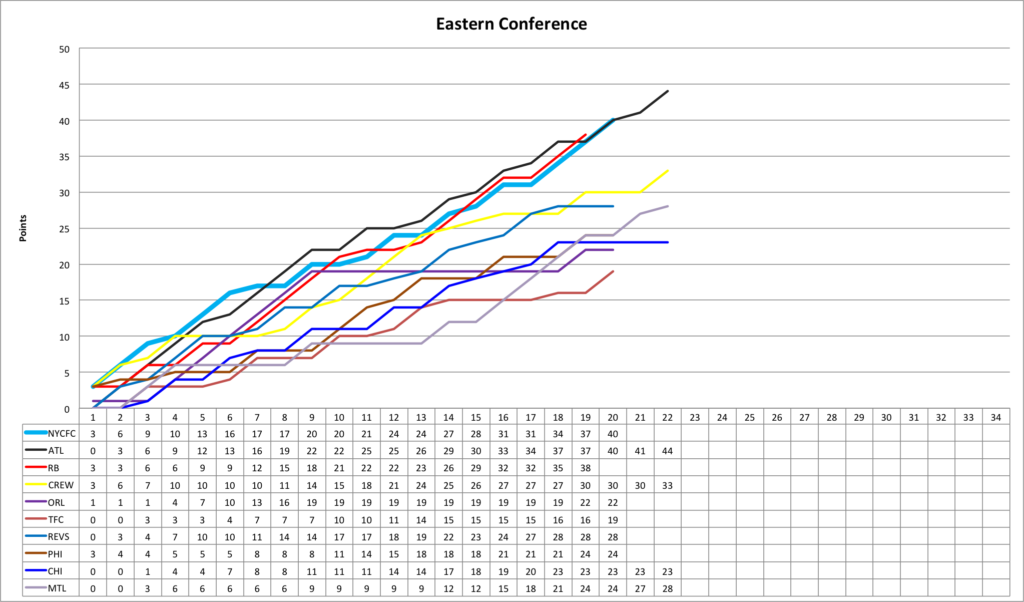 NYCFC did not play this week but just about all the other teams that NYCFC fans care about did. The top 3 other teams in the East won, though Columbus hardly causes any worry any more. In the West, Dallas earned a tough road point in Houston, Portland dropped 2 points at home and LAFC dropped 3 in spectacular fashion in Minnesota.
The net result is the East has a 3-way tie on PPG, though NYC can leapfrog Atlanta if it wins its 2 extra games, and RB can leapfrog both if they win all their extra games. All three East leaders have a better PPG than anybody in the West, but after that the West exceeds the East. Compare the East playoff line of 43-44 to the 48-49 projected in the West. This is a major reversal from this time last year, when the 5th place East team had a better PPG than the 2nd place West team. In fact, this time last year, the East won every same place matchup from 1st through 9th. Right now, the West wins 4th through 9th. The 3 best teams are in the East, but it gets real thin after that. There are probably 2 playoff spots in play after Columbus in the East.

That makes it hard to start dropping teams from contention in the East. If anything, DC might force their way onto my chart if they can make a run based on all their home games, though Rooney’s going to have to stop giving the ball away. Philly can’t put the ball in the net. The Revs still can’t win on the road. Toronto are getting players back but have a lot of teams to climb over.
In the West, Minnesota just climbed to within one win from the playoff line with 4 wins in 5, including a a 3 win week like NYC just had. But they now get 6 of the next 7 away before enjoying 5 of the last 7 at home. The Galaxy have quietly solidified a playoff claim with no losses since May. Portland has not lost since April. Barring a collapse by one of those teams, RSL, Houston, Minnesota, arguably Vancouver and charitably Seattle are fighting over one spot.