Four games left in the MLS regular season for NYCFC, and fans of the team are hoping it can turn things around. Yet they’re not really doing poorly. They’re just not doing as well as we hoped they would. The BlueBirds’ high point was after Game 19, which saw them win game 4 of a 4-game win streak. The PPG at that point was 1.58 for the year, and after a terrible start, saw them go 7-2-2 over the next 11 for 2.09 PPG over that period. Over the most recent 11 games they are 4-3-3 for 1.36 PPG.  That is a drop, but it’s not terrible. It’s 0.01 worse than what Philadelphia — sitting right behind them in the standings — has done all year.  It qualifies for the playoffs in both conferences.  But it is obviously a big falloff from that high.  NYCFC fans convinced themselves — I think — that the team was better than it was, that the early start was a combination of new players, a new system, and bad luck, and that the 11-game run after that was the new reality. But sports is often a series of streaks that can have no particular relationship to cause and effect. NYCFC had a bad start, a great mid-season run, and is now playing in between those two poles. At the end of the day you  are what your record says you are, and right now NYCFC is a third place team.  That doesn’t mean they will not rise or fall in the next four games. They still have a chance to make a run higher, or drop further.

Playoff Clinching Update: Dallas FC  became the first team to clinch a playoff spot this weekend. By my calculations NYC can do so this weekend. A win alone will ensure NYC finishes ahead of Chicago and Columbus. DC and Orlando play each other, and NYC clinches over the loser, or clinches over both if it is a tie. So a tie does the deal and has NYC finishing ahead of 4 teams for a playoff clinch. Similarly, a New England tie or loss to Columbus has NYC clinching ahead of New England.

Three West Conference teams that NYCFC has only played twice, and Columbus. NYC is 0-2-2 0.50 PPG against Columbus. NYCFC hosts Columbus on the last day of the season. Columbus had 3 wins in its first 22 games this year (one of those against NYCFC) and now has 3 in its last 6. Great.

The East Conference Playoff line is holding down at 40-41 points. 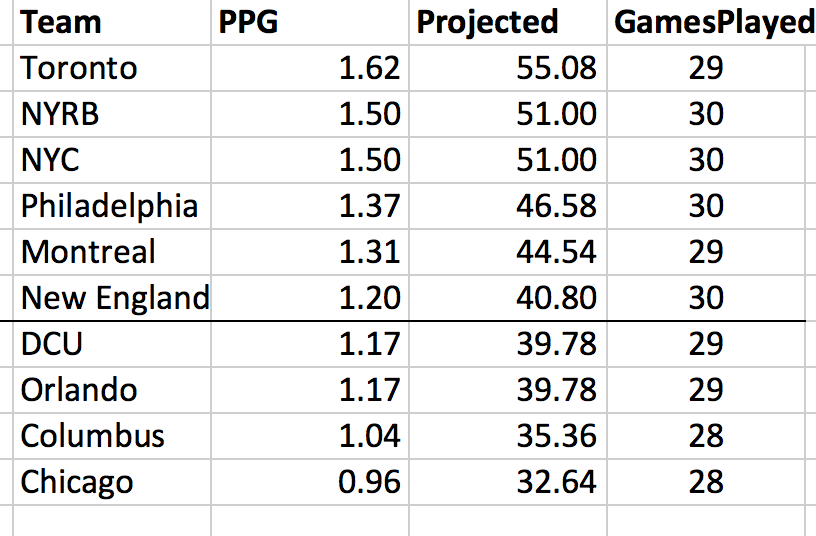 The what-we-need-to-do chart did not lose any possibilities this week, but it will take 4 wins to keep 57 a possibility.

Charts Keep Rollin’
Finally, thanks to commenter FootyLovin for the following. Here is a chart comparing the 5-game rolling PPG average for NYCFC for 2015 and 2015.  He thought of it, inspired by my 4-game block chart. I did switch to 5-game rolling because I think it’s a better measure than 4 games. I only used 4-game blocks to have more data points in the other chart. 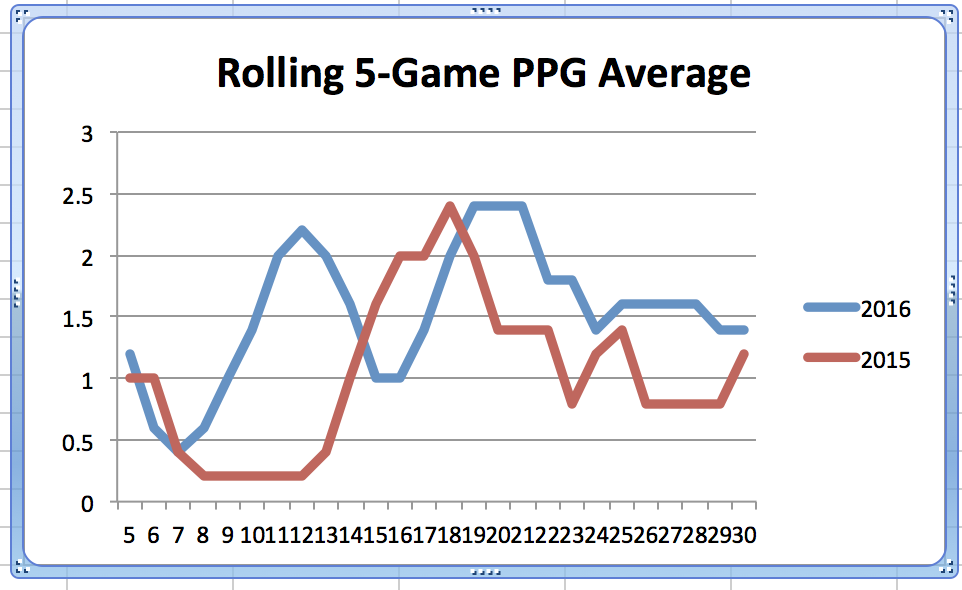 Just wow at the similarities. The team is clearly better, but the season path has so many points of equivalence.