NYCFC averages 3.0 PPG without Patrick Vieira as gameday coach in 2016, and only 1.46 with him. Something needs to be done about this.

Strength of Schedule In sum, we have the easiest schedule based on opponent records and Toronto has advantage of the best Home/Away setup. Here’s how the contenders compare on H/A:

Based on strength of schedule, the H/A, current point totals and recent form, I see the teams with a shot of finishing first in the East, in order of likelihood, as Toronto, NYC, and RB. I see a small gap between Toronto and NYC, very close to 50-50, and a bigger gap between NYC and RB. Anybody else is a very long shot. Even RB is starting to look iffy. Even if they catch NYC there is still Toronto and vice-versa, and the time is running short to catch 2 teams.

Toronto and NJRB have the 2 longest undefeated streaks in MLS right now. RB is 3-0-5 in their last 8 which is the longest streak. That’s only so-so for an undefeated streak but they are killer at home and have 5 of 8 in Harrison which is their only hope. Toronto is 5-0-1 in the last 6. They are 6-1-3 in the last 10. They lost 4 times in their first 10 games and 3 times in the last 15. Getting that win in Philly was huge for them. They are tied with Dallas and RSL for second most road wins and have the most favorable H/A variance remaining. We need someone to step up and stop them. We might need to be rooting for the Red Bulls on September 18. Whether you pick Toronto or NYC for first in the East arguably comes down to whether you think they are just on a hot streak that can end without warning, or you think they’ve put it all together at the right time and will finish just as strong.

Playoff clinching update: there is a minimum of 6 games combined needed to clinch finishing ahead of Columbus, DC and Orlando. For New England and Chicago the number is 5. Every time one of these teams gets a result pushes that further away, but also very likely helps us against the other top contenders.

A Historic Line Crossing: for the first time in NYCFC history the team has more points than the projected playoff line. The latter stands at 40 and NYC has 41 points. If the team were to lose out there’s a decent chance they would still make the playoffs. 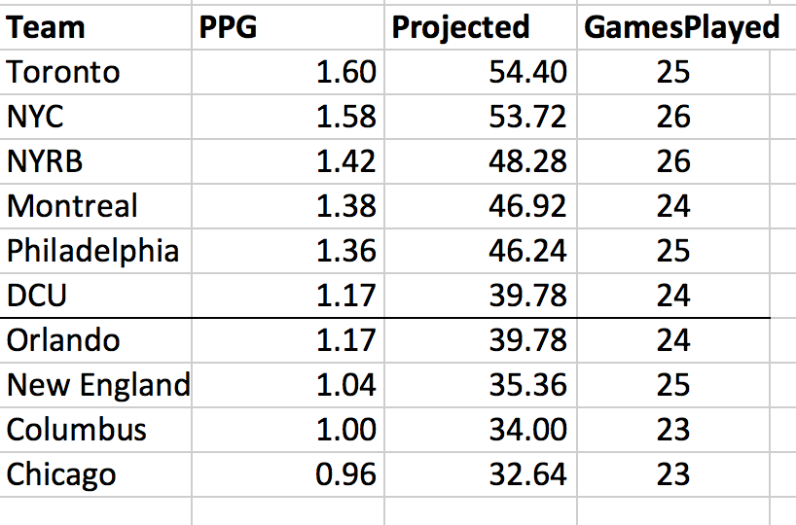 NYC’s Home record is now effectively the same as its Away. They played 13 at Home and 13 Away and have earned 20 points at Home and 21 Away. In terms of statistical confidence that’s a meaningless difference. The last 5 games trend heavily favors Home: 4-1-0 2.4 PPG against 1-2-2- Away 1.0 PPG. These are guesses, but I think there’s roughly a 50% chance NYC wins out at home, and maybe a 10-20% chance they get no more road wins.

Figuring a way to get five wins gets a minimum of 56 points. I think the First Place line is likely to be right near there at the least. I very much doubt it will be lower, as that requires that both Toronto and NYC slip. If Toronto stays hot or NYC starts a streak, it could be higher.