You are here: Home / Archives for 2016 NYCFC Assorted 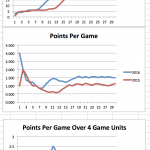 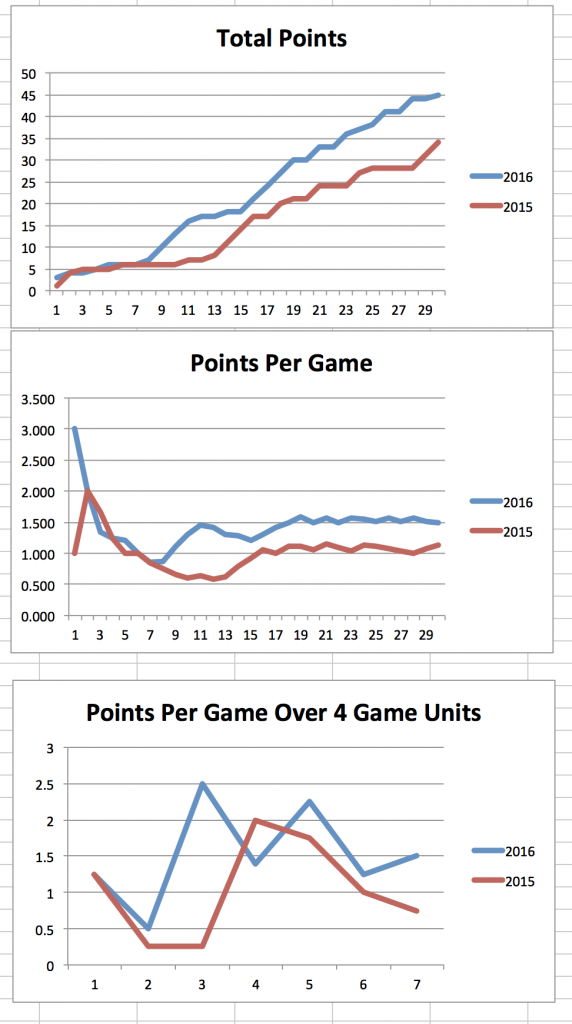 I’ve posted the top 2 charts a few times before. They each have flaws, but together I think they provide enough information to draw some conclusions.  The problem of the first chart is that the lines only go up or stay flat. Over the course of a season every team will seem to progress, with the differences being a matter of scale and speed. The issue with the second chart is that every new game has a lesser effect on the chart than the games before it did (when they were each the latest game). After game 3 each game including the latest is worth 33.3% of the total. After game 30 each game is worth 3.3%. So you will usually see progressions like the ones above where there are some big moves early then   the lines flatten out unless there are big streaks like winning or losing 4 out of 5 or so.

Despite those limitations, you can tell that NYCFC’s 2 seasons started out the same, with an extended slump, but that they broke out of it sooner in 2016. You can also tell that in 2016 NYCFC has had 2 stretches of above-average play that have largely driven most of its success this season. You can also see that the 2015 team had one stretch from games 14-18 that was responsible for the best part of that year.

But the new chart really shows all this better. I split the season into mostly 4 game blocks. Because 34 is divisible only by 17 and 2, it’s impossible to do that exactly so the split is theee 4-game blocks, followed by a 5-game set. That’s 17 games and half the season, so repeat it to round it out. We are through 7 of the 8 blocks, and this chart makes everything I described above even more clear.  Both the 2015 and 2016 teams started poorly. 2016 pulled out sooner and more sharply. 2015 NYCFC had one stellar stretch at the end of the first half of the season followed by a long, painful decline, while  the 2016 team had 2 very good blocks in which it averaged more than 2 PPG. Since then NYCFC 2016 has been muddling through the remainder of the season at about its average rate of success.  The last block is five games and will probably determine whether the team is viewed as limping to the playoffs or going in hot.

Currently, our home PPG is 1.0 and Away is 1.67. If we do that to the end of the season we get 45 points. we would also have a season for the ages, opposite of all home away trends by an absurd amount. So I agree we will revert to the mean.
If we revert to the mean we do better. Last year playoff teams earned 2.04 PPG at home and 1.06 at home.
If we do that from this point we get 49 points.

If you’re not concerned that we might be more likely to drop our Away performance towards average than to double our home PPG, I admire your sunny disposition. I still think we can do it, but we’ll be skating at the margins of history if we do.