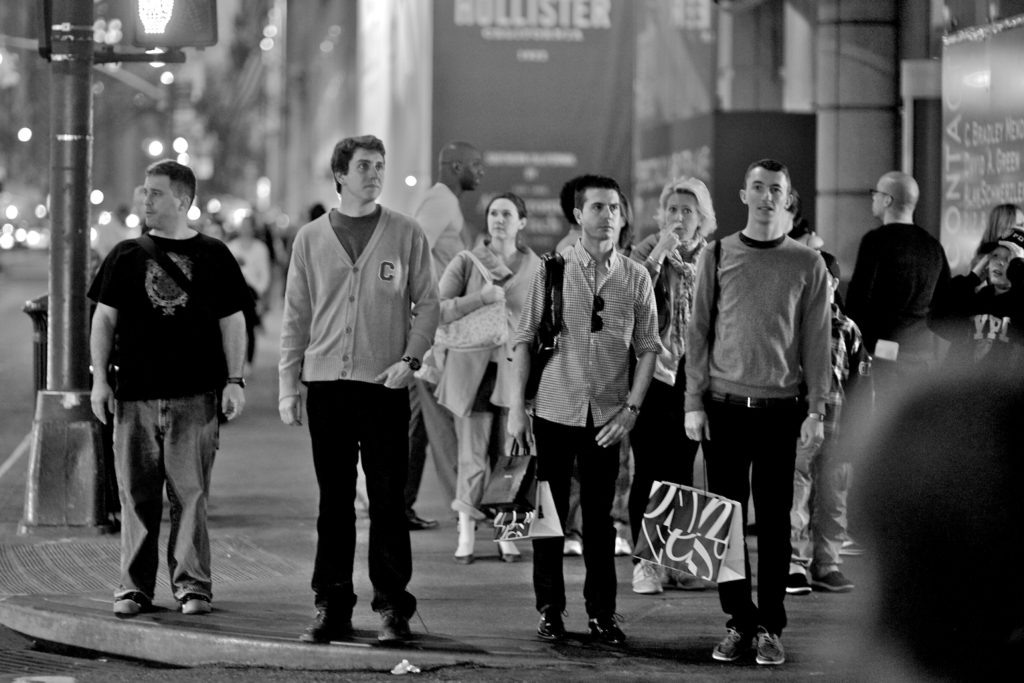 Four straight wins matches the best such streaks of NYCFC’s history. Still, to put themselves in the best, most defensible position to win the top spot in the East, they might need to extend it to 7, because the next three home games against New England, toronto and San Jose, are the easiest on NYCFC’s remaining schedule.  NYCFC probably will need in the area of 12 more points to finish first in the East.  It will not help that NYC will play all or some of those games without all or some of Johnson, Matarrita, Chanot, Callens, Sands,, and TBD:  Héber (status uncertain) and Shradi (return date completely unguessable).

With less than a quarter of the season remaining, NYC have the league’s second best PPG, second fewest losses*, second best Goal Differential, second most Away points, second best Away PPG, are 1 of only 2 teams with a winning Away record and positive Away Goal Differential (LAFC is the other of course). Largely due to having fewer games played, they are third in Total Points (Philadelphia is second with 1 more point and 2 more Games Played), and fourth in Total Wins (Philly and Atlanta both have 1 more win with 2 and 1 additional games played).

I do not know what the argument is that NYCFC is not clearly the second best team to date in MLS. Schedule congestion for Atlanta? It’s a fair point to note, with their recent Leagues Cup and MLS cup runs, plus the CCL early on. Some note that NYC has lost 3 of the most recent 4 games against teams above the playoff line: RB (both a win and loss), RSL, and Atlanta.  You can create excuses for all those games based on missing players and ref calls, but I prefer to note that NYC also has won against DC (A), the Galaxy (A), Philadelphia and Seattle, plus the previously noted RB game. NYC’s record against teams currently above the playoff line is 5-4-3, with 7 of the 12 games on the road, including 2 of the wins.

It’s hard to measure that against how other teams have played against playoff teams.  It is a small game sample, subject to change as teams move above and below the line, and most importantly, ignores Home and Away.  I think Home and Away is more important in MLS than playoff status. All of NYCFC’s remaining games are against teams currently above the playoff line, and 4 are Home and 3 Away.  If you gave me the opportunity to switch that to having only 3 of the Games against playoff teams, but all 7 Away, I would not take the offer.  I think you measure tough games in MLS at least as much by Away performance as by the opponent’s overall record.  With those disclaimers, I checked the records of Atlanta, Philadelphia, Seattle and Minnesota against current playoff teams. Of those, I would only say Philadelphia has a better record, subject to all the factors just listed. And the Union lag NYCFC in all other major stats.  besides the ones listed above, they had 5 fewer points at 27 games than NYC does now. 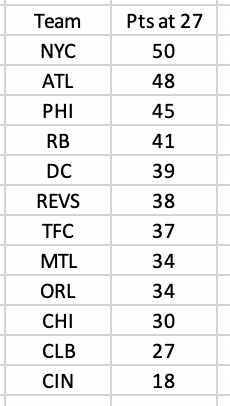 I dropped more low end results from the following table. I could conceivably add some to the top, but that seems hubristic, and simply unlikely, though not impossible. 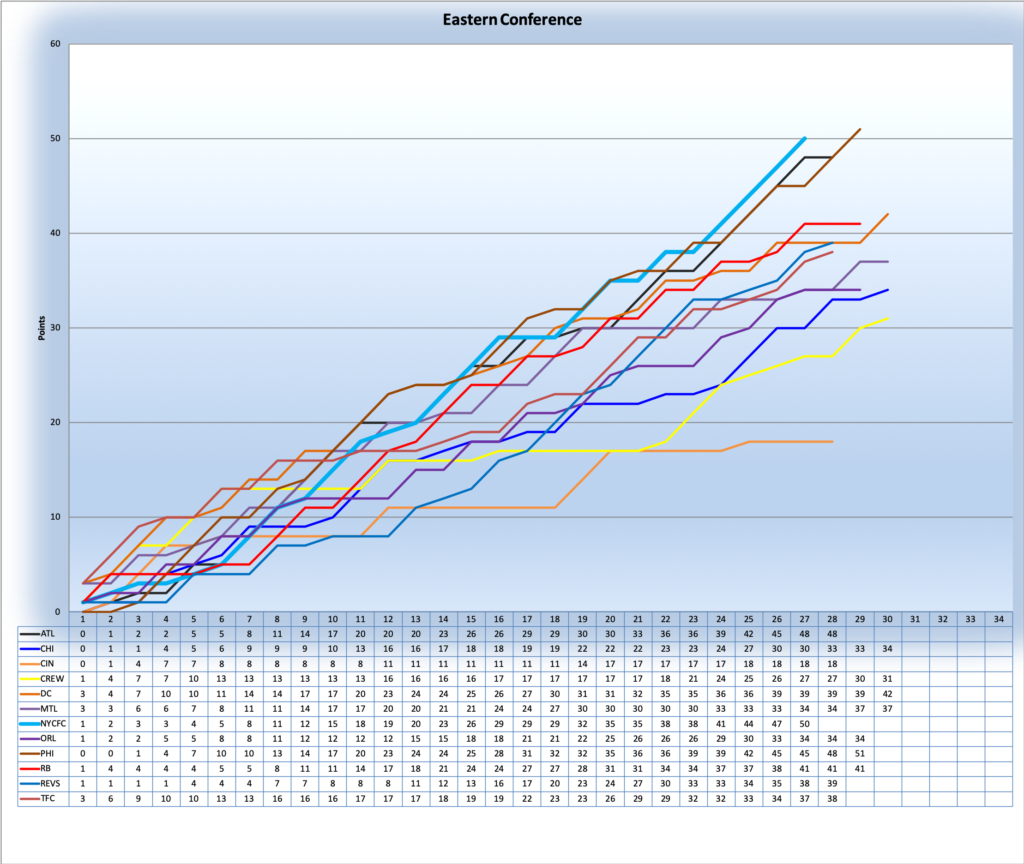