Sift through my soul to see what’s lost and found

With this week’s game against Philadelphia, NYCFC has now played every Eastern Conference team that was in the league as of 2015 at least 10 times in MLS regular season play. This shows NYCFC’s Points Per Game against each of those teams, excluding playoffs, US Open Cup, or anything else except MLS regular season. 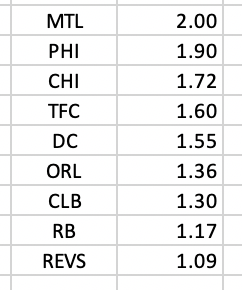 Here are some more factlets with respect to NYCFC against those teams:

Odd that Montreal has the second best record at Yankee Stadium while having the worst record against NYCFC overall. The gap between NYCFC’s best Away record and second best is massive. I knew NYCFC had trouble against New England but wow.  A few more items of note with respect to this set of teams and MLS season play:

Empty my pockets that were weighing me down

Sort the MLS tables by different variables and NYCFC is all over the place, but mostly somewhere good.  The biggest factors are the games played and losses.  NYCFC is:

Last in Games Played
Tenth in Total Points
Second in Points Per Game
Fourteenth(!) in Total Wins
First for Fewest Losses
Second for Win minus Loss differential at +5. LAFC is +9
First (Tied) for Draws (with DC, SKC and Chicago one back)

Of course Games Played is a factor but NYCFC’s total amount of tied games no longer seems so ridiculous. Part of the league is is catching up.

Look at this pretty PPG table:

The Union’s traveling supporters were singing “We’re top of the table” Saturday night, which they are entitled to do. But part of that is a factor of games played. This chart helps show where teams are at similar schedule states: 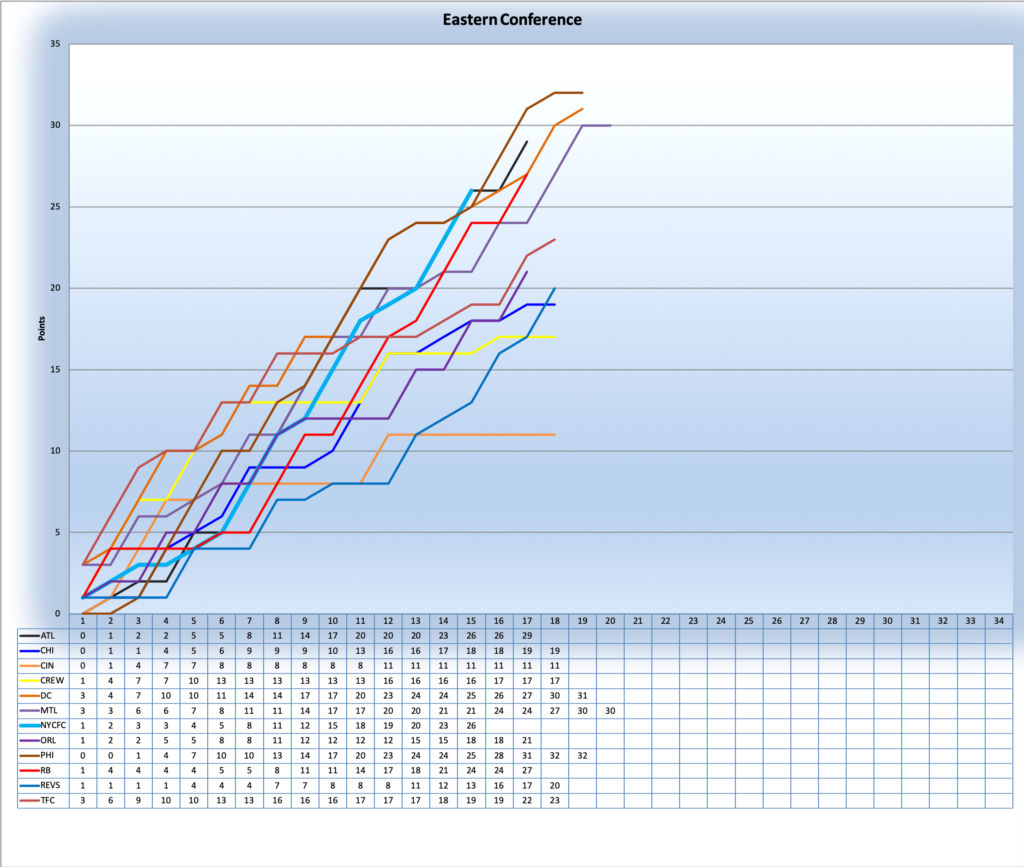 To help further, I made a mini-table showing each team’s points as of Game 15 where NYCFC sits now: 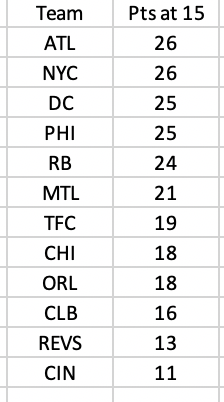 Ties are sorted alphabetically but Atlanta had more wins at 15 than NYCFC so this is fair anyway.

Gonna walk away from trouble with my head held high

The top half of the potential outcomes chart is looking more attainable: 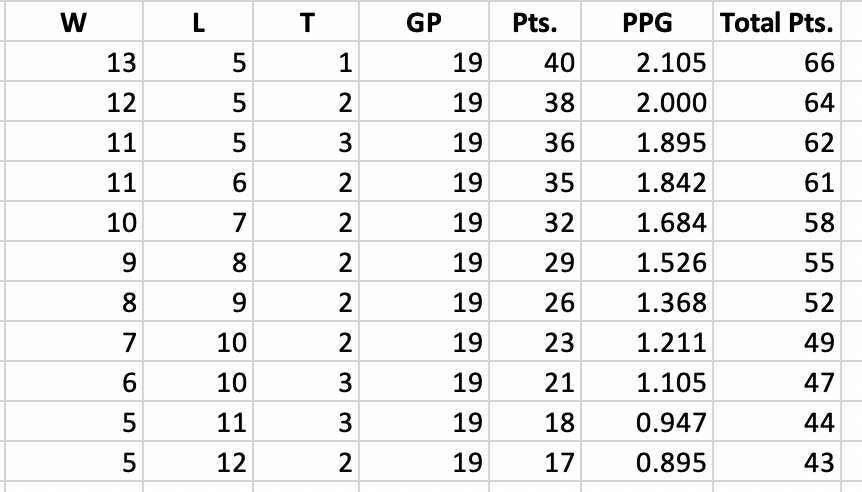 Tears don’t care who cries them

I posted about this (on Twitter and the NYCFC Forums but apparently not here) at the beginning of June after 33 games because I lacked the patience to wait 3-4 weeks for Torrent to coach his 34th game. But now we have a full season under Domé and his record is 14-8-12 for 54 points and 1.59 PPG.  Patrick Vieira’s first full season record, which corresponded exactly with the 2016 season, was 15-10-9 for 54 points and 1.59 PPG.  I don’t draw any huge conclusions from this except to note that it seemed awfully unlikely at the end of 2018 and even several games into this one. Torrent is helped considerably by his 5-1-0 start before he started tinkering much. Vieira took over a bad team and made it good. Torrent took over a strong team and after his excellent start earned just 21 points in 19 games before turning it around. But Vieira also took over between seasons while Domé had to adjust on the fly. Who knows, maybe his rough stretch will be like Tiger Woods early in his career. He had won his first major when he decided to hire a new swing coach and completely revamp his swing. He won nothing for a couple of years (roughly) but then the changes took hold and he won 7 Majors from 1999 to 2002.  I’m not predicting that much hardware for NYCFC but some success seems possible, at least.