“We all see what we want to see. Coffey looks and he sees Russians. He sees hate and fear. You have to look with better eyes than that.”

Twice as many Draws as Wins.
Haven’t lost since March

Only 1 Home Win.
Took 11 of the most recent 15 possible Away points.

We’re really relying too much on low-percentage wonder goals.
Players are stepping up and creating something out of nothing when the team needs it.

It has been a frustrating 10 months to be a NYCFC fan. After Domé Torrent took over and won 5 of his first 6 games as coach, the club went into a tailspin, winning just 3 of the next 19 regular season games across 2 years. Then when things seemed to start to turn around, with a W-W-T-W-W sequence, the club goes and draws twice against struggling Chicago and Columbus.

But the tepid upswing has to be measured against a schedule that gave NYCFC 6 Away games in its next 9 just as it started to play better. In a league where teams collectively are currently earning 0.63 more points per game at Home than Away, you cannot expect to compile Away points too consistently. As it is, NYCFC is the only team with a better road PPG than at home, largely due to this scheduling quirk.

If you expect certainty to come soon, there’s even more frustration on the horizon. The next 4 games are at Home, so one would expect that to answer some questions.  If NYC piles up some wins, all is well. If not, abandon hope. Right?   Except NYCFC will be probably missing the following players on international duty for some or all of those games: Johnson, Callens, Chanot, Ofori, Matarrita, and Parks. Plus Matarrita’s backup Ben Sweat was hurt Saturday and his status is uncertain. On top of that, the schedule is not at all evenly spaced, with a game this week, followed by a 3-week layoff (excluding a US Open Cup against USL side NC FC), and then 3 games in 8 days, so there will be both rust and fatigue, with limited rotation options due to the missing players.  All of that means any stumbles by the team come with a pre-packaged excuse. On the other side, a win over Seattle during this stretch would likely come while they are without key contributors Lodeiro and Ruidiaz, so if you want to dismiss some NYCFC success you have that as fodder. And a win in the US Open Cup can be dismissed as against a lower league opponent.

It took a while to sort out but the competition this year is coming into focus and seems to be spread out: Atlanta, DC, Red Bulls, and Philadelphia, with no single, or even pair of teams standing out.  Can Toronto climb into this group with a healthy Jozy? 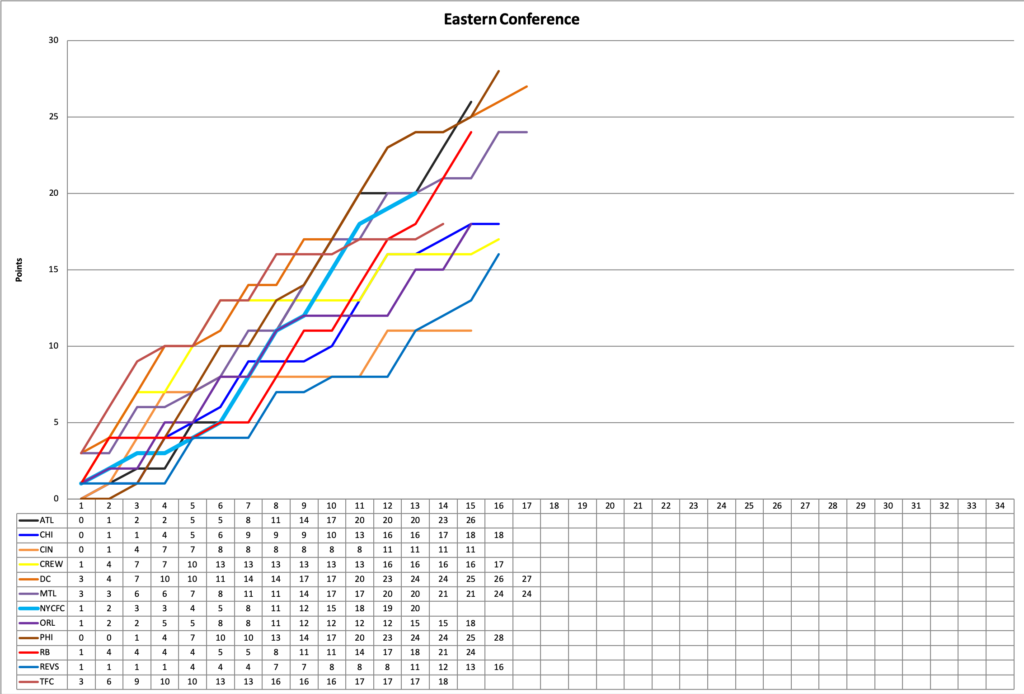 How many more draws is it reasonable to project at this point. The record is 18 by a bad Chicago Fire side in 2014. They also had 8 after just 13 games. 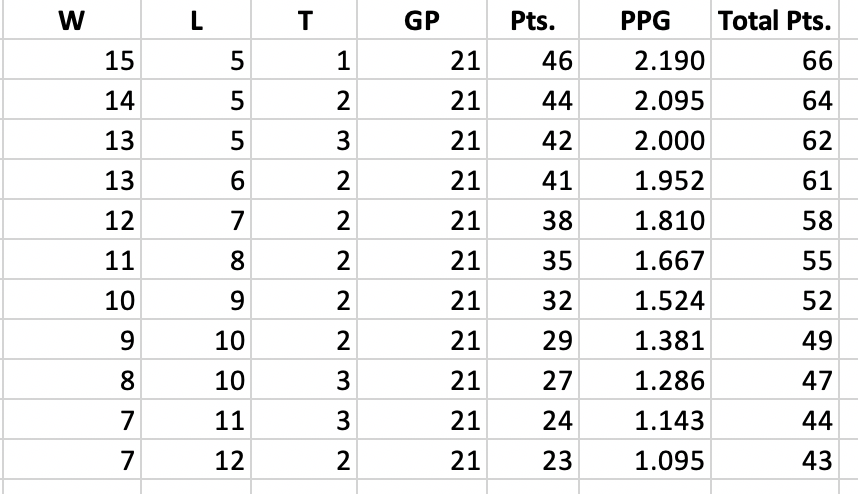 I’m not too concerned at being below the blue line right now because of the schedule. NYCFC has a chance to compile points and improve it’s PPG against easier games starting now.  Whether it does, well, …

For the record, I look at NYCFC and expect the same thing I did at the start of the season. I think the team will finish with 52-29 points, probably have a first round Home playoff game, but not advance beyond that round. Even if they play Away in the 4-5 game they have a decent chance of winning that. But absent a major acquisition in the summer window they are a longshot to win the East, and even moreso, the MLS Cup. It’s possible, but very unlikely.  In the end, they seem to be the same level team we have seen starting in 2016.

“–  At that moment, man finds his character. And that is what keeps him out of the abyss.
—  I think I understand Lou.”