Short update with no NYCFC action this week. 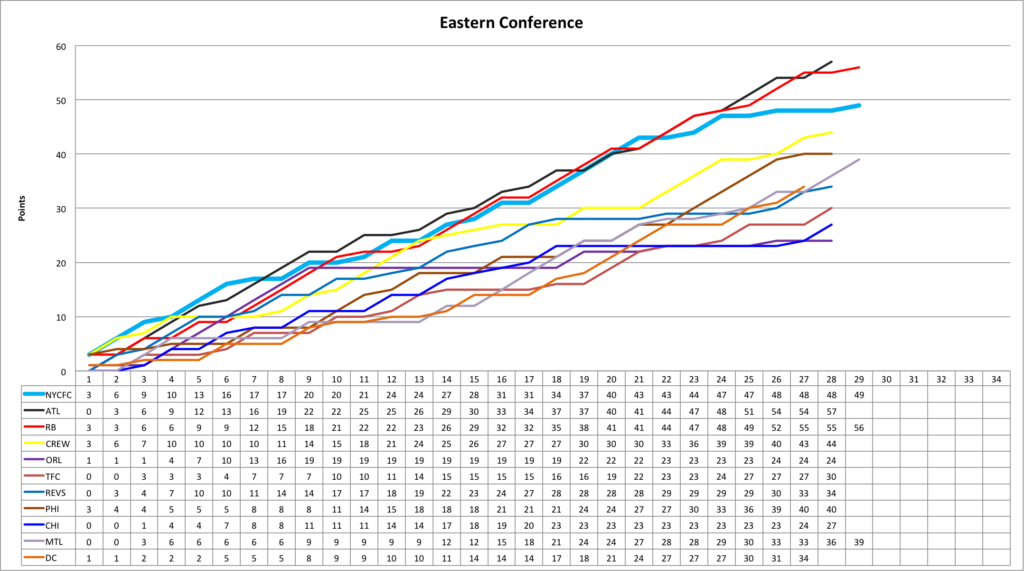 While standing still, NYC gained a little ground looking both up and down at Red Bulls and Columbus. Catching RB would still take a Red Bull slump, while the cushion over the Crew is a bit more comfortable.Montreal’s win over the Union makes dropping to Fifth much less likely, avoiding an Away single game elimination.The Impact win also put pressure on DC, who has to win both games in hand now to stay just ahead of them.
Looking West, the LAFC tie dropped them from just above to just below NYC, and the Dallas draw with Columbus made catching them a bit easier as well. Still, passing FCD or SKC will be tough and if NYC turns itself around and makes a run to the MLS Cup final, the game might very well be in the Central Time Zone.
Finally, here is how NYCFC can clinch by beating Montreal this week.  NYC has already clinched ahead of TFC, CHI, and ORL.  If NYC wins that’s 52 points. A corresponding Montreal loss drops their max to 51.  That’s four. New England’s max is 52, but even if they get that by winning all of their remaining games, they will only have 14 wins while NYC will have 15 with the win over the Impact and total wins is the first tie-breaker. That puts NYCFC ahead of 5 teams no matter what and that is a clinch.