So it is fair to say this team has had both its worst medium length run of games and worst extended run since its first season, which until now has seemed to be an aberration which never again needed to be revisited. NYCFC has never been so bad for so long since Kreis and a hideous roster forced on us by rules that were abandoned immediately afterwards.

But it is also fair to point out that the team’s best 6-game run this year came at the very beginning, which lends itself to corresponding longer runs of poor, or at least mediocre play. Historically, this team has previously always had its best run around midseason.

I don’t think there is any reason why the best streak happened in games 1-6 this year instead of the usual time. So maybe that’s driving the perception of 2018. Yes, you can point to the coaching instability and transition, which coincidentally started with the Arsenal rumors after Game 7 as the reason for the falloff (and I have so pointed), but that also cannot be the reason why the club had its best ever 6-games just before those rumors started. The club could easily have been its regular pretty good self during those early games, instead of its best ever 6-games.

It is also interesting that the club had its best ever second-best-non-overlapping-6-game-run in 2018. Games 16-21 (right around mid-season again) earned 15 points, which is also as good or better than the first best 6-game sets of all prior seasons. The second-best-6-games in 2015-17 earned 9, 11, and 13 points in order.

This is a bit unfair to 2018 because it has only 17 games instead of 22 after excluding that pair of 6-game sequences. Maybe the club does get better in the last 5 games left and this improves. But for now, it is fair to say that in 2018 there has been a greater disparity between the best and worse, and more of a roller coaster effect, than any year after 2015, which is pretty much an outlier that I think most agree can be ignored for purposes of interesting comparisons.

Here are the charts. NYCFC is down to 6th in PPG, though just barely behind LAFC.

Remember when 64 points seemed a more than reasonable goal? Now it is the best that can be done.

Columbus has an opening to catch NYC. Philadelphia has an outside shot. If the Union wins both extra games – which is by no means a gimme – it is still 3 points back. The DC-Montreal-Revs race looks like it could come down to the final weekend. 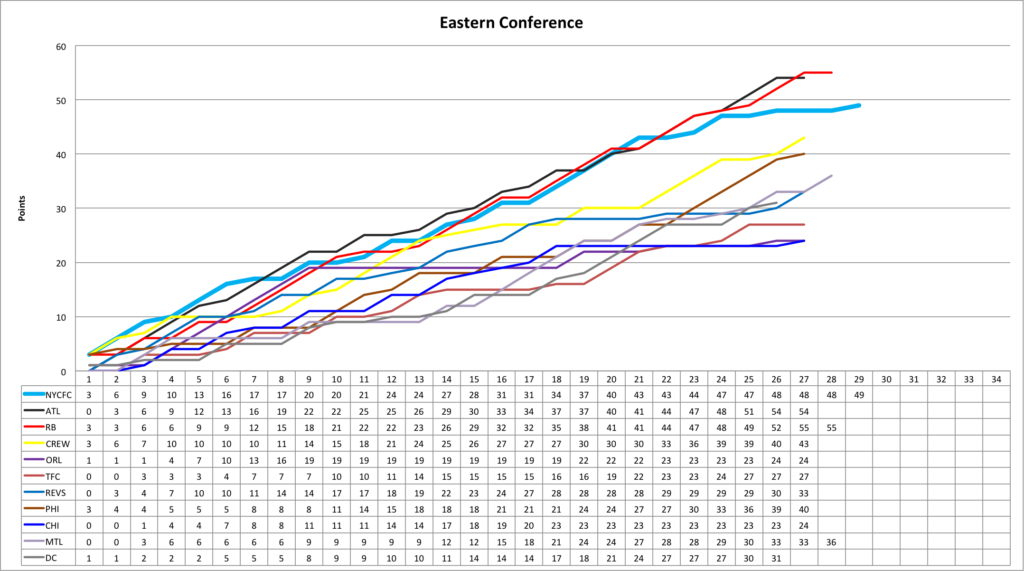