With 70% of the season completed, NYCFC is currently on pace to finish with its highest point total ever, exceeding the previous high by 10 points, and yet attain its lowest place in the standings since its first year.  Note these are as of Monday and do not include this week’s midweek games.

As additional reference for the pace being kept by the top 3 East teams, remember that last year Toronto ran away with the league at 69 points and was considered at least a respectable candidate for best MLS team ever. Throw in Dallas and this year there is a strong chance of 4 MLS teams with more than 60 points. 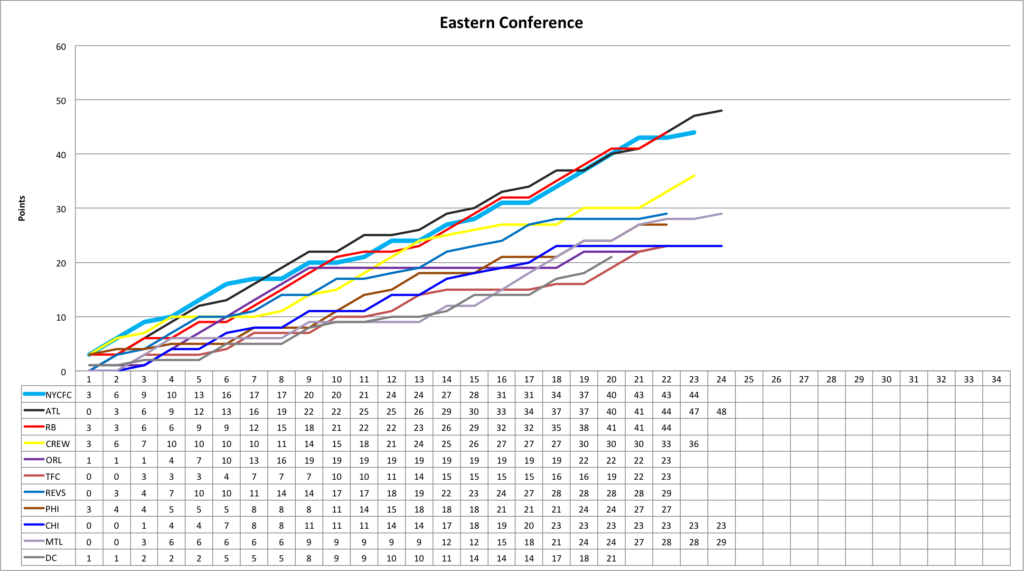 Even accounting for H/A splits, DC’s remaining schedule is only slight easier than Montreal. Philadelphia’s schedule is tough, but they have a bit of a cushion. I think Wazza does not experience his first MLS playoff game this year.
In the West, LAFC has the easiest schedule, with only 1 game left against the league’s top 6 teams, against whom they are 0-5-3 for 0.43 PPG. I think they will climb higher again in the West .
Gator and Soup handled the schedule info above for the top of the East. To their efforts I would add that Atlanta has 4 straight away games against bottom of the table teams, but it is still 4 straight road games. DC is showing some life, as is Colorado after acquiring Acosta. By the number, though, their only tough game is in Harrison.
Red Bulls have tough road opponents in Vancouver, NYC, Montreal, and Philadelphia. Yes 3 of those teams are middling overall, but the home records are solid. The Philadelphia game is the week before decision day and the Union’s last home game, which they might desperately need to make the playoffs. The Red Bulls also play both the Embers and Atlanta, while ATL and NYC are done with each other.
Still, there is no dispute NYC has the toughest remaining schedule of the 3. At 1.55 PPG, the Union have the lowest Home PPG of any of NYC’s remaining road opponents. The only real positive is that after the Red Bulls next week, the remaining 4 home opponents are all poor to terrible road teams.

Keep the remaining schedule in mind when looking at this table:

NYCFC can exceed it’s best point total even with a severe slump.

NYC can achieve its first clinch of the year this weekend (and so can Atlanta and the Red Bulls):

Apologies for the random team order. Max is the total of a team’s points so far plus their possible if they win out. Delta +1 is the difference between a Team’s Max and NYC’s current total (47) + 1 to eliminate tie scenarios. That represents the points NYC must win and/or that team drop for NYC to clinch. Minimum games is the least number of combined games by NYC and that team for a potential clinch. This weekend, if NYC wins and Chicago draws or loses, then NYC cannot finish lower than Chicago.