Four points from 9 (or worse) might be a good official definition of a slump for good MLS teams. The travel schedule between the 2 road games a week ago was hideous, but the easier game was first, and it was reasonable to expect at least 6 points from this set of 3 games. The race with Atlanta and Red Bulls has no room for bad results. Nobody needs the charts to know that but here they are: 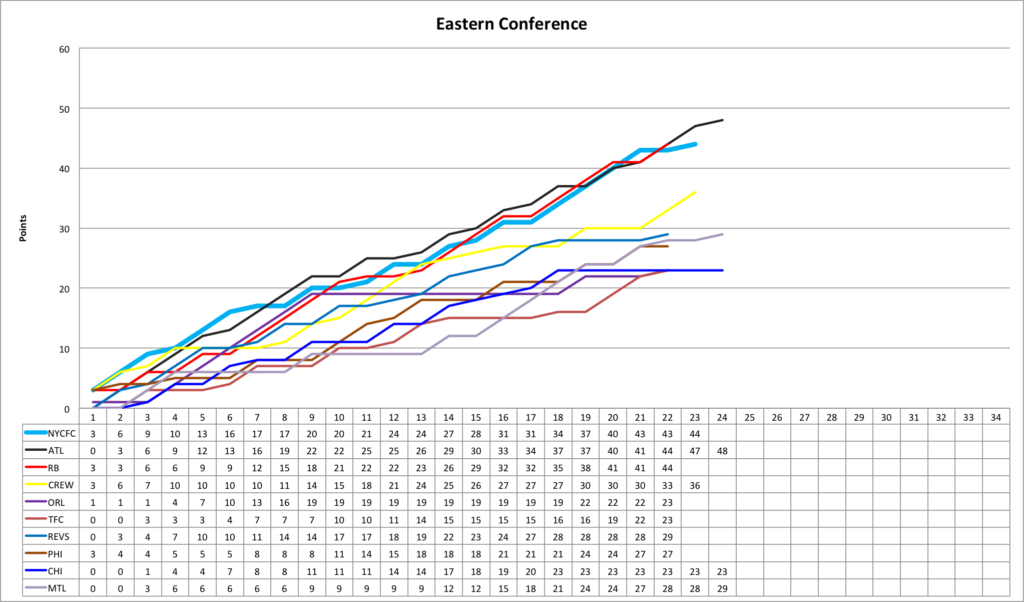 Next week I might go ahead and add DC into the East line graph for maximum chaos. Their line should rise though I don’t think they will make the playoffs. DC has 3 Away games left, against NYCFC, RB, and Chicago. Do they get 3 points?. That gives them 21 with the 18 they have. Figure they need 44 to ensure a playoff spot. That means they need 23 points in their 12 home games. Their Home opponents include Portland, Atlanta, Red Bulls, Dallas, Toronto, and NYCFC. Let’s give them 9 points from those 6 games, which I think could be generous. That means they need another 14 from the other 6 games, which requires 4-0-2 or better. They’re not that good to manage all of those pieces and not slip somewhere.

Back to NYCFC, the draw with Vancouver means the Pretty Pineapples started the season 5-1-0 against the West (3H3A), and then went 1-2-2 (2H3A) in the next 5. One game, away at Minnesota remains. Remember that NYC is playing an imbalanced H/A schedule against the West to offset having the extra home games against both Orlando and Red Bulls.

Finally, Villa’s absence from the vancouver game means the team has now had one DP miss at least 10 games in every season to date. This is, however, easily the best season in terms of DP playing time (and I would argue performance based on the eye test and such).
In 2015, Lampard was late and missed games after he did show, Pirlo did not sign until July, and Villa missed a small handful of games. In 2016 Lampard missed the first 12, then another 3 later on in the season, while Villa and Pirlo missed a combined 3 games. Last year, Pirlo played only 15 and missed 19, largely due to coach decisions, while Villa missed 3 and Maxi 5. This year, Maxi and Medina have played every game to date, though Medina had low minutes early on. Here is the average number of DPs to play in each game year to year:
2015 1.56
2016 2.47
2017 2.26
2018 2.57