Well that was a hell of a week. 9 points in 7 days (though 3 of those points are reflected in the prior update).
Red Bulls and Dallas won their games. But Atlanta, LAFC and Portland all dropped 2 points, the first two at home. Dallas and NYC now top the league with 2.0 PPG. Atlanta continues the odd trick of performing slightly worse at Home than Away.

The gap between the top 3 in the East and the rest is growing. In the West, 4th place SKC is slipping and is now nearly halfway between 3rd place Portland and the Galaxy in 5th. It is very likely that a team in the East will get more than 60 points and not get a bye. There is a decent chance of that happening in the West.
Three wins in a row makes for pretty lines:

The current trend has the team finishing with a point total in the high 60s. It’s necessary to remember, however, that they have now played 2 more Home than Away games. That is the most imbalanced in favor of Away they have been or will be all season. It is also the most imbalance from now to the end. After getting even with the next 2 Away, the schedule never goes more than +/-1 the rest of the way. Still, remember that of the remaining 16 games, just 7 are Home and 9 Away when reviewing this:

Here is the East line graph: 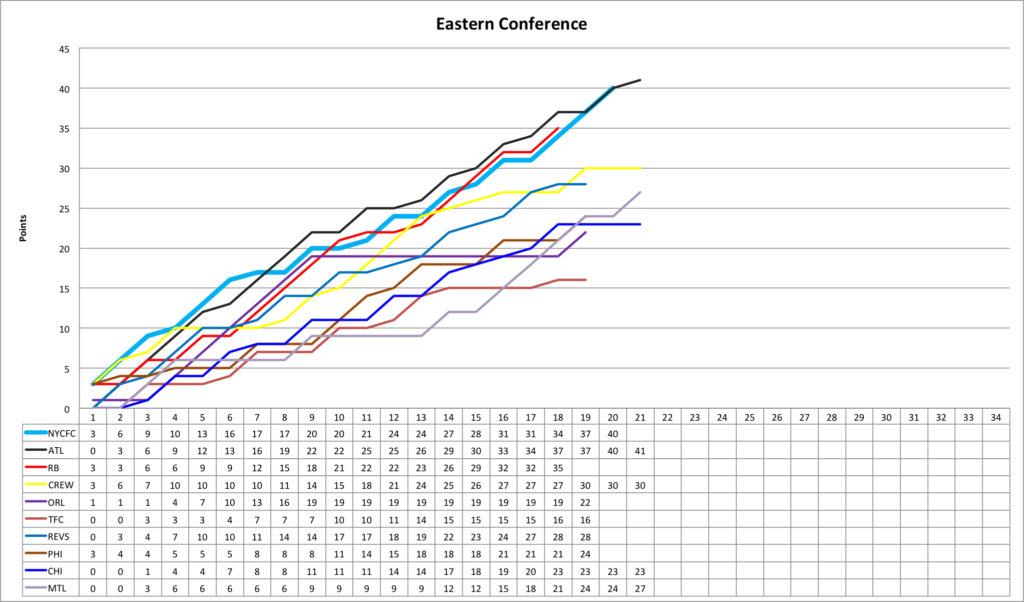 Villa has started 10 of NYCFC’s 20 games to date. He did not play in 7 and came in as a sub in 3. The club record when he starts is 5-3-2, 1.70. When he does not start the record is 7-1-2, 2.30. Of the non-starts, the record is 5-1-1, 2.29 when he does not play at all.
His starts are evenly split 5 Home 5 Away. His non-starts are 6 Home 4 Away. This does give an advantage to the non-start record, but even if you add one win to the record when he starts and delete one win from games he does not start, to compensate for the schedule disparity, then the record without him is still better, by 2.22 PPG with to 1.82 PPG without.
I do not think this proves that the team is better without Villa. You need to adjust for opponent quality, who else was injured, and your own eye test. But, I am fairly certain this demonstrates the team can succeed very well without him, which is not something anyone is likely to have believed until very recently.