Hello and welcome to your schedule-driven nickname-heavy midpoint update.

NYCFC started its existence with a 6-game Away winless streak. It then never again failed to win for 6 straight Away games until this weekend. Both six game streaks consist of 4 losses and 2 draws. In between, NYCFC went 19-20-9 Away for 1.375 PPG. NYC’s Away PPG for 2018 is 1.00.

Third in the conference. Sixth in the league by PPG. The Wizards and the Golden Wings are within easy reach. The Burn and the MetroStars have effectively the same record and are a bit more of a stretch, with the difference being the Bluebirds have 2 games coming up with Taurine Pushers that can decide that 1-on-1 race, while the Celestes are done with the southwestern Toros. The Five Stripes have opened a gap and hopes of catching United-C probably depend upon them having an Away slump.

Halfway through 2017 the Gotham Blues had 30 points and fans were excited. Halfway through 2018 the Robber Barons have 31 points and fans are distressed. Progress!
This is the best first half performance for Las Palomas in their historic history to date.
Dividing the season into rough quarters of 9-8-8-9 games, 2018 tied for the worst second quarter of the season for the Blue Notes at 1.375 PPG. That’s the same as 2015, except that in 2015 1.375 PPG was good for this team.
As noted in the prior post, City is currently on a 6-game Away winless streak that matches its worst. Right now the Tenants have an Away record of 1.00 PPG, which is basically league average (0.99) and their worst since 2015. With 8 Away games left, a realistic hope would be to get 11 points 8 games (1.375 PPG) to bring this season’s road performance up to the neighborhood of its historic average. For reference, and we can hope but certainly not expect to match this, the Squatters’ best 8-game Away stretch was 5-2-1 (2.00) in 2016, including a 4-0-1 (2.60) stretch. That was done against tough competition, too. The Home PPG of the teams in the 8-game run was 1.79, and the opponents’ home PPG in the 4-of-5 game core was 1.91. Which probably is a hint that a road streak has more to do with your performance than the quality of the opponent. The home PPG of NYC’s remaining Away opponents is 1.62.

So, getting to 70 is tough to imagine, and even 65 is very hard at this point.
Remaining schedule strength, based on opponent H/A PPG:
ATL 1.27
FCD 1.45
LAFC 1.28
NYC 1.31
RB 1.50
SKC 1.43
The league PPG to date is 1.39.
I know, every one of you is thinking, but Mark, the Swamp creatures’ opposing PPG is inflated because they play the Blue Hawks twice at Yankee Stadium, where City Actual has a league best 2.75 Home PPG, and yet the Ruby Bovines always beat the Ceruleans. Thanks for reminding me. Their adjusted opponent PPG excluding the Cyans is 1.34, which is not that tough, so the 718s better take care of business themselves. 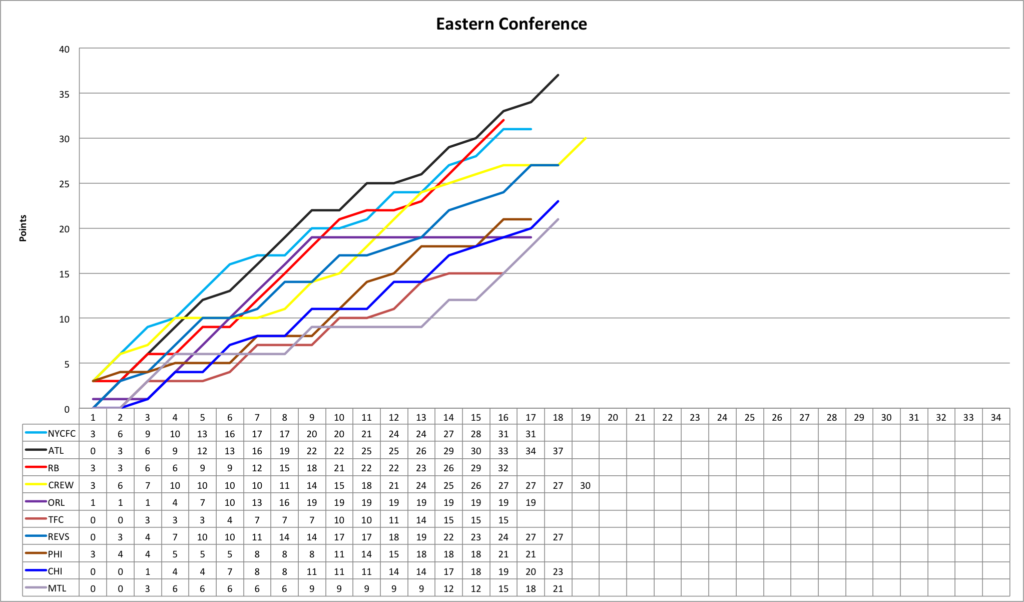 The race for bottom playoff spots in the East is a mad scramble among the desperate, and I have been forced to add Montreal, who started the season losing 10 of their first 13 games yet have passed the Purple Lions and the Chester Conjunction, and are now just below the playoff line behind the Burning Fervor of Chicago. Les Impingements also have no draws through 18 games, which is just weird. The only team not on this chart now is ManU-B.