That was a highly entertaining way for NYCFC to end the regular season in 2016.  Last week was a dispiriting loss for NYCFC, and not unexpected.  That result, plus the limited and eeasily understandable scenarios for finishing this week — which were well covered in numerous places — led me to skip my weekly write-up.

Since the team’s 4-game win streak in games 16-19, the Blues have been riding a mostly alternating up and down ride based on whether the next game is Home or Away.  Since Game 19, the Home record is W-W-W-D-W-W and the Away record is L-W-L-D-D-L-L-W-L.  Overall since Game 19 and before yesterday they were 6-5-3 for 1.50 PPG over 14 games. They have not gone more than 2 games without a Win, or won more than 2 games in a row during that time, dating back to July 10.  If it feels as if the team has been treading water for a few months, it has. But yesterday was joyous, and all the more so because the result was very much in doubt for the first 70 minutes before NYCFC exploded for 3 goals, including a sweet cherry-on-top from Villa at the death.

They finished 7-7-3 on the road which is only a disappointment because at one point they were 5-2-1 and 2.0 PPG. It is no surprise that that pace was unsustainable. As it is the team is guaranteed both the most Away wins and most Away points which is a significant accomplishment but in no ways a guarantee of future success. Last year Vancouver and Portland had the best away records and combined for 47 Away points. This year they have 21. This year NYCFC is in the position it is almost solely due to that 5-2-1 opening stretch Away. After the disastrous start at home and before the second half of being kind-of-good, that solid stretch Away made the season a success. At Home, with yesterday’s win, NYCFC ended 8-3-6 for 1.77 PPG.

Never Won Against or Lost To

With the win against the Crew yesterday, the list of MLS teams NYCFC has never won against is down to Dallas, RSL and SKC (pending expansion next year). All are in the West and NYCFC has played each only twice.

Meanwhile, there are 4 West Conference teams who still have never won a game against NYCFC: Colorado, Houston, San Jose, and Vancouver.  More impressive, or at least quirky, NYCFC has also never lost to Toronto through 5 games, with a record of 2 Wins and 3 Draws against TFC.  That’s something to keep in mind for a likely first playoff opponent, although I would not bank anything on it continuing just because it has up until now. 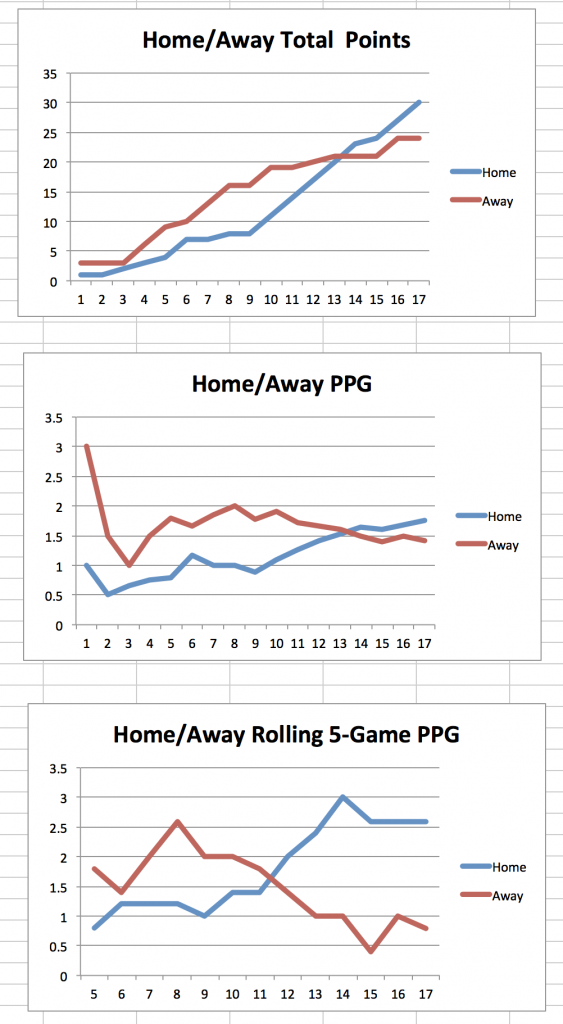 The top 2 both show that NYCFC maintained a better Away record than home through the first 2/3 of the season with Home finally crossing ahead of Away only around the 14 game mark.  Note of course that these charts present the data as if the Home and Away games were happening simultaneously, or at least evenly, which they were not. The 5-game rolling average shows the lines crossing a bit earlier as they are not burdened by the full history. It also better demonstrates how the team’s fortune at Home and Away completely turned around in the second half.

More to come wrapping up the season.   I’ve decided not to do a single omnibus wrap-up post but will spread some details and hopefully some insights throughout the week.