You are here: Home / 2016 Weekly Updates NYCFC / 2016 Weekly Update – August 15
The last two weeks have tightened things up in the East to the point where the projected PPG for the top 5 teams shows a 5 point spread from 48 to 52 at season end. Anything less than a win against LA gives 2 teams (Toronto and RB) the chance to climb ahead of us in the standings, and Philly and Montreal can get within a game while having games in hand. This cannot all happen because TFC and the Union play each other. 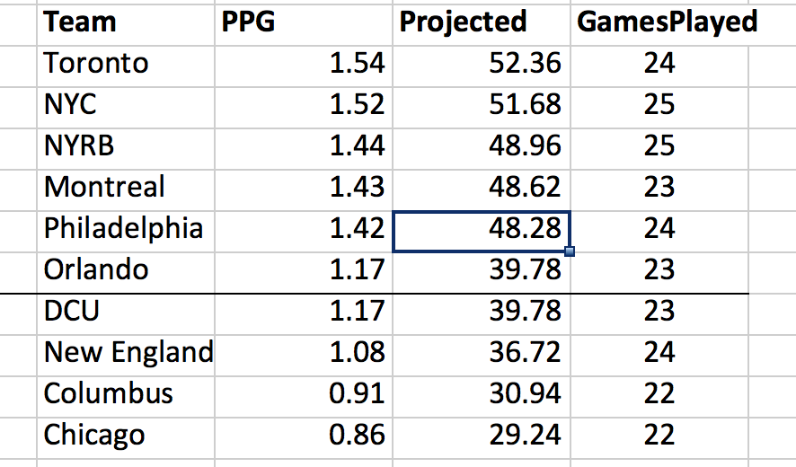 Still, most teams would love to have 1.0 PPG on the road in all their games and NYC is at 1.62 overall. NYC will also still probably have the best Away record in the league. Dallas and the Galaxy are closest and both need to do better than they have to date to catch the Gotham Blues even if NYC gets 0 road points the rest of the way.

NYC has played more Away games than Home for the first time since Game 1 March 6. Between June 18 and August 20 they will have played just 2 home games in 2 months.

How close are the Pigeons to clinching a playoff spot? About 4 weeks at the minimum. City clinches when it has more points than the maximum possible points for 4 East teams. Chicago’s maximum points is 55, New England and Columbus 56, DC and Orlando 60. City has 38. It will take a minimum of 6 games to bridge those gaps with the Fire, Revs and Crew, and 8 games for DC and Orlando. Any game involving them or us counts; a game between any one of them and the Blue Notes counts as 2. But any time we drop points or they win points extends it. Even though we are a near lock for the playoffs, we probably won’t clinch until the end of September.

Last year the Robber Barons played in the black secondary six times by Game 25, which was actually behind the pace for the year. They wore that kit 10 times overall. This year we have seen the HypnoKit just 3 times, and none of the remaining Away games seem to require it. This only has playoff implications for the hyper-superstitious.

Draws make for boring updates to the what needs to be done chart. Also, we have now drawn more times than all of last year.