You are here: Home / 2016 Weekly Updates NYCFC / 2015 Weekly Update July 17
We’re still in first place, and also a clear first via PPG.
We’re up to 3rd place Supporters Shield, and tied for 4th by PPG. Those are new highs for the team.
Now up to 2 games over .500 against the East, and 1.50 PPG.
This is heady stuff. We were crap last year. Last year at this point we had 24 points, six wins, and Lampard hadn’t shown up yet after 21 games.
Starting with the win against Vancouver, which ended the 7-game winless streak, Las Palomas have earned 2.0 PPG over 13 games. Keep that up over the last 13 games (that’s a big IF) and that’s 59 points.
On the road the Robber Barons are at 1.90 PPG for the whole season. That is better than the combined H/A PPG for every team in the league except Colorado. Three more road wins in 7 tries and we tie the “modern” MLS record. We have twice as many road wins as home wins. We have more road wins that 11 teams have home wins (12 if you count ourselves).
With 13 games to go, we need just 4 or maybe even just 3 more wins probably to get the Celestes a playoff spot.
We’re aiming higher at this point.
After the next game against the Red Bulls there will no longer be a H/A imbalance in games played. That’s bad/good news if you can figure it out.
We have a 3-point lead on the Union, and the closest thing to bad news is that they can erase that by winning their extra game remaining. The good news is that extra game is on the road. They have 6H left and 8A, and they are terrible on the road, with only one win in 9 tries so far.
The playoff line projection is trending down. Will it pick up again like last year? If it stays where it is we’re virtually a playoff lock. 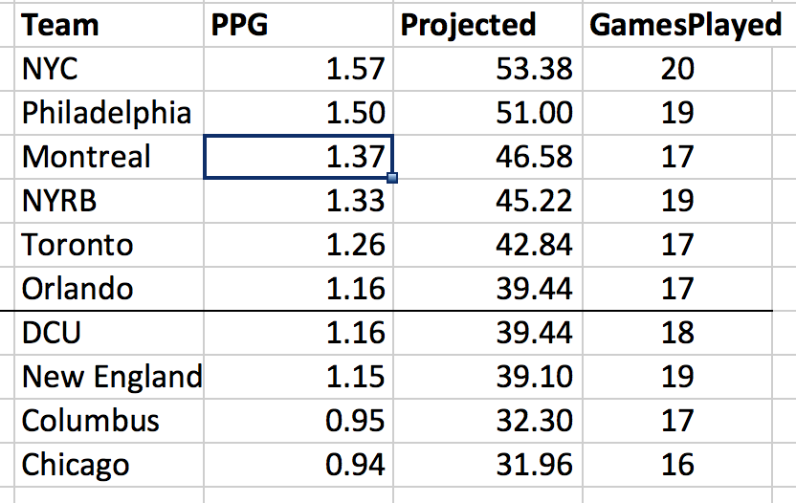 The what-we-need-to-do part is starting to look easy: