In the last 5 seasons of MLS, all 34 game seasons, here is every team that had a .500 road record or better, with their Road Points, Home Points, and Total:

Here’s what I notice. Outside of 2014 SKC, they are all really good teams. Vancouver 2015 has the next lowest point total and it finished 3rd in Supporters shield. Also, 6 of the 8 had more Home points than Road Points. For teams like us, just looking to sneak into the playoffs somehow, 2014 SKC is our only model.

You can adjust that. Maybe you want to flip a win between Home and Away. If you think it will take fewer than 49 points to make the playoffs, play with it that way. I think there’s a decent chance that 46 or 47 makes it, but there’s still not a lot of wiggle room.
If NYCFC doesn’t manage to keep up it’s Away success, and slips to just one game under on the Road for the year, here is what we are looking at as an example to get to 49 Points.
Home 6-2-1 19 Pts 2.11 PPG
Away 3-5-3 12 Pts 1.091 PPG 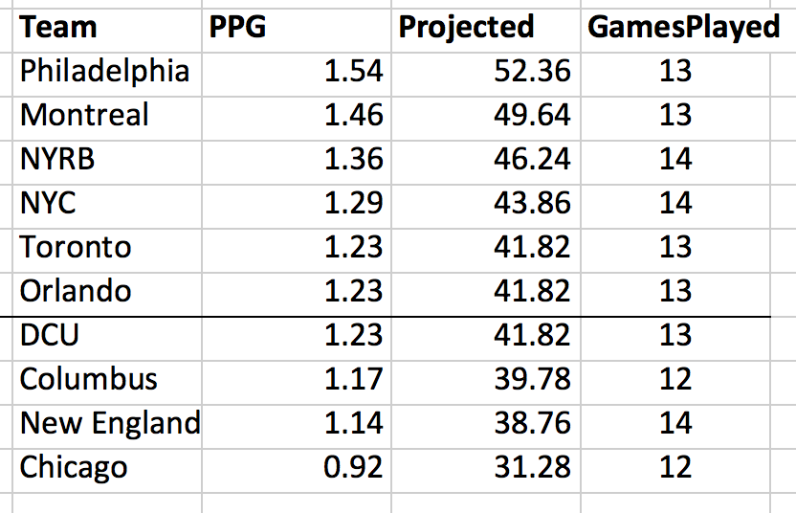 So the current Playoff line looks like 42 points. If that sounds encouraging remember that it started May at 38.
Ignoring Home/Away here is what we need to do to reach assorted point totals:

I guess I think we’ve shown ourselves weak at home for a full season plus while our road success is 6 games. So that’s why I fear that.
But let met get uncharacteristically positive.
Last year both our records were bad, and Home was better than Away, as is normal. But, relative to our league position our Away Record last year was better than Home. We finished 17th in the league overall, but we had the 19th best Home record, and were tied for 13th Best Away record. So I guess there’s some basis for saying our Away record so far this year is not a fluke. I hope so.
PS: We actually had better Away records than the Galaxy, Dynamo, and RSL last year (plus some of the expected bottom-dwellers). We tied with DC and Toronto on Away points.

Or some combo of the above Plus the East (excluding NYCFC) has lots and lots of ties and continues losing to the West.

None of those is crazy talk, but some require many parts to go right.